G8 talks ideal opportunity to get investors on board

North needs to improve when it comes to wooing potential investors 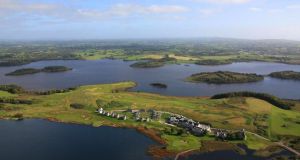 The Lough Erne resort selected to host the G8 summit. The summit will deliver an immediate short-term boost to the local economy.

It is the season for end-of-term reports, and Northern Ireland is nowhere near the top of the class when it comes to wooing potential investors, one of the North’s top bosses has warned.

Mark Nodder, who heads the bus-building firm Wright Group, says latest research which looks at how Northern Ireland compares with other countries as a place to do business shows the North is currently scoring low in five key subjects.

According to Nodder these are access to finance, inefficiency when it comes to government bureaucracy, tax rates, restrictive labour regulations and an inadequately educated workforce. Not exactly a glowing report for a region that is hoping to produce a show-stopping performance when the G8 summit arrives in town next week.

The information about how the North rates as a business location was gleaned from a Word Economic Forum survey of business leaders and potential investors. Nodder qualifies it as a “mixture of perception and limited experience”.

But as the group managing director of one of the North’s top exporters and the president of the Northern Ireland Chamber of Commerce knows only too well “perceptions shape opinions and influence decisions”.

A research report commissioned by Barclays Bank estimated that the G8 summit next week could generate £40 million of “net benefits” for the North. But any potential economic benefit hinges on exactly how convincing Northern Ireland will be – can it project an image of a place that can confidently build a new economic future and deliver significant returns?

There has already been one potential public relations hiccup as a result of the £380,000 initiative to provide a temporary face-lift for recession-hit rural villages in Co Fermanagh.

Empty buildings
Some have criticised the picture-perfect posters that have been erected over derelict or empty buildings to give the impression that there are flourishing businesses where there are not.

The G8 summit, which will bring the political leaders of the world’s wealthiest nations to the North, will deliver an immediate short-term boost to the local economy. But as Nodder highlighted during the Northern Ireland Chamber of Commerce’s annual lunch recently, the reality behind the upbeat façade that will be on show in Northern Ireland next week is very sobering.

He warns that the North cannot sit on the sidelines anymore – whether it is with regard to the corporation tax debate which has effectively been on hold thanks to the timetable for the referendum on Scottish independence.

Instead Nodder wants Northern Ireland to embrace new initiatives that put it firmly in the driving seat as regards the local economy.

Initiatives such as the Northern Ireland Chamber of Commerce’s own Growing Something Brilliant campaign.

He is urging everyone with a stake in the North’s future to work together. “Quite simply the campaign seeks to inspire more businesses to grow through innovation, through export, through persuading each other to invest and to take the next positive step.”

It is also a sentiment that has been echoed by the new lord mayor of Belfast, Sinn Féin councillor Máirtín Ó Muilleoir.

He believes everyone needs to work together to get the economy back on track. He is keen to harness what he describes as the “huge force for good which is Irish America”, and intends to ask them to “put their shoulder to the economic wheel one more time”.

While any help from “Irish America” will be welcomed with open arms in the North, next week presents the ideal opportunity to get the most important US decision-maker on board when it comes to the Northern Ireland economy.

President Barack Obama and the First Lady are scheduled to visit Belfast for the first time next week.

Let’s hope the city can recreate the magic that made former president Bill Clinton and his wife Hillary fall in love with it and Northern Ireland because that is where the real economic magic begins.

1 Group that distributes Mercedes in Ireland shifts control offshore
2 Fair Deal nursing homecare leaves little for bills and gifts
3 US threatens retaliation against EU over proposed carbon tax
4 MSL and Malta, business leaders on Brexit, and take home pay under FG
5 Airbus poised for deal with regulators to settle corruption probes
6 Microsoft to open cyber security centre in Belfast, creating 85 jobs
7 Getting out from under ‘never-ending’ Celtic Tiger debt burden
8 Money matters: ‘My father embarrassed us with his haggling’
9 Are there annual limits on inheritances or gifts to a child?
10 Nestlé buys Allergan business to expand in medical nutrition
Real news has value SUBSCRIBE