Debt-driven growth model out of favour, focus on reform and use of all available policy tools 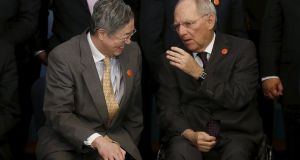 The world’s top economies failed to find consensus on dealing with sluggish global growth, with the G20 meeting in Shanghai coming up only with a recognition of the need to stick to structural reform and to use all available policy tools to help kick-start expansion.

“The global recovery continues, but it remains uneven and falls short of our ambition for strong, sustainable and balance growth,” ran a communiqué issued after a two-day meeting of G20 finance ministers and central bankers in Shanghai.

“We will use fiscal policy flexibly to strengthen growth, job creation and confidence,” the communiqué, issued at the end of the meeting on Saturday, continued, adding that monetary policy would continue to support economic activity and ensure price stability, but that monetary policy alone could not lead to balanced growth.

The G20 is clearly going to have to come up with new ways of stimulating growth, as many of the most powerful figures in the group, such as Germany, no longer approve of the debt-financed growth model which helped fend off global collapse in 2009, also at a Shanghai G20 meeting.

Where the G20 countries did find agreement was on identifying the major risks to the global economy, including the possiblity of Britain’s European Union exit, slumping commodity prices, heightened geopolitical risks and, chiefly, volatile capital flows.

Apparently, “Brexit” had not been part of the draft communiqué but had been included after British officials pressed for it. Britain goes to the polls on June 23rd referendum to decide whether to remain in the EU.

After stalemate in Shanghai, attention now turns on data from Europe, China, Japan and the United States to see what next steps to take after no agreement was reached on new stimulus measures.

Currencies featured high on the agenda at the G20, a grouping of major industrialised economies that includes the US and Japan as well as emerging giants such as Brazil, China and Indonesia. The gathered nations restated a commitment not to traget exchange rates for competitive purposes, including through devaluations.

“We reaffirm our previous exchange rate commitments, including that we will refrain from competitive devaluations and we will not target our exchange rates for competitive purposes,” the communique said.

Meanwhile, there were further uncertainties at the G20, such as the prospect of rate hikes in the United States, plunging oil prices and concerns over the financial strength of leading banks in Europe.

As far as China goes, the next focus will be on the annual parliament, the National People’s Congress, which begins on March 5th and at which the economy is sure to figure highly.

At HSBC, Qu Hongbin, chief China economist, and Julia Wang, greater China economist focused on remarks by People’s Bank of China governor Zhou Xiaochuan on the sidelines of the G20 where he said there was scope to ease monetary policy and reiterated that it is an effective policy tool that should be combined with fiscal policy.

“This is consistent with our observations that monetary conditions have continued to ease and that this will help accommodate fiscal expansion. We have pencilled in for 50 base point (bps) policy rate cut and 400 bps reserve ratio cut for 2016. While such across-the-board easing is still possible … the PBoC has a broad enough toolkit to ease monetary conditions in a variety of ways,” they wrote.

Zhou also repeated last week that there was no basis for continued weakness of the yuan and China would not seek to boost exports through competitive devaluation.