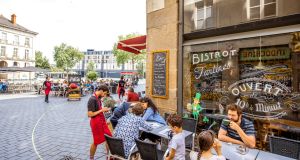 Nantes, France. The skills shortage is particularly acute in digital, according to Matthieu Thibault, president of DSMI, an IT infrastructure company based near Nantes and employs about 70 people. Photograph: iStock

In a factory near the town of Cholet, some 50km from Nantes in the west of France, large blocks of clay are being shaped, dried out and finally fired in a kiln at 1,000 degrees centigrade. These terracotta building blocks are then shipped off to construction companies.

The factory’s owner, Bouyer Leroux, is the leading French manufacturer of terracotta building materials, and stands to benefit from the country’s tentative economic revival. However, there is one key dynamic that could put a brake on growth, despite a recovering economy and France’s reform-minded government: difficulties in recruiting.

“The current situation for hiring both skilled and unskilled workers is difficult because there’s an imbalance between supply and demand,” said Bouyer Leroux’s chief executive Roland Besnard, wearing a hard hat and a high visibility vest over his navy blue suit.

Even in France, where unemployment is stuck at more than 9 per cent and among the highest in Europe, an increasing number of companies are complaining about the lack of skilled workers, according to Inséé, the country’s national statistical institute. This mismatch between companies’ needs and the skills available – a phenomenon in large parts of the euro zone – could crimp the region’s nascent economic recovery.

This summer Bouyer Leroux, which employs 1,400 people in France and is increasing revenues at a rate of 10 per cent a year, had to increase its delivery time because of a dearth of maintenance workers for its production sites. Mr Besnard said: “Maintenance activities are not skewed to one industry so there is a competition for maintenance workers between industries because of the slight recovery.”

Mr Besnard echoes the sentiments expressed by many chief executives who are struggling to hire skilled and unskilled workers in France when he said “the main concern is the university system, the school system and a welfare system that’s too generous”.

It is a concern that is shared by policymakers. France’s finance minister, Bruno Le Maire, told a group of journalists last month that the question of skills is “the most important economic issue in France” today. He said: “We have a system of learning that does not provide the skills that are needed. And suddenly, you have falling unemployment.”

According to a report in July by the Bpifrance public investment bank, nine out of 10 mid-sized companies are facing recruitment difficulties. The main reason that they put forward for this is an inadequate level of qualification of the employee.

“There is a paradoxical situation in the French labour market where on the one hand there is high unemployment but on the other hand, a large number of mid-sized companies say that their main difficult is hiring,” said Nicolas Bouzou, head of Asterès, an economic research centre.

He said this was largely because of three reasons: a lack of trained people for the jobs that are open, a generous welfare system for unemployed people in France that does not always motivate them to look for a job and a lack of adequate housing where many of the jobs are located.

Cholet, which owes the rise of its prosperity to the settlement of weavers in the 17th century, is situated in the thriving Pays de la Loire region. Its unemployment rate of 5.7 per cent in the second quarter is far below the national level of 9.1 per cent and among the lowest in the country, thanks to its strong position in industries ranging from services to construction to agri-food.

The skills shortage is particularly acute in digital, according to employers such as Matthieu Thibault, who is president of DSMI, an IT infrastructure company that is based near Nantes and employs about 70 people. “The challenge for my business is to keep growing,” he said. “The main difficulty is the recruitment and retention of qualified people in our IT field.”

Bouyer Leroux’s Mr Besnard said that while companies have tried to reduce labour costs through automation, “we need competencies which are more specialised in automation management”.

It is a similar story at SDEI Ouest, a mechanical engineering company in Cholet. It has grown from 50 people in 2015 to more than 80 people today, and plans to reach 100 people by 2021. The company is struggling to keep up with production because of hiring difficulties, according to director Bruno Fradet.

“There is a real shortage of skills in the engineering field, in particular automation and industrial robotics. We don’t find these types of people in our region and we need to be able to have the infrastructure such as housing to welcome families who move here for these jobs.”

Some of these companies are addressing these recruitment difficulties by looking for growth externally through mergers and acquisitions. Bouyer Leroux is in the middle of acquiring Soprofen, a French rolling shutter and garage door manufacturing business, which will take its revenues from €200 million to €320 million.

At a national level, policymakers are also trying to play a part and encourage a Nordic model of life-long learning

“We are looking for external growth because today there is the question of a critical mass,” said DSMI’s Mr Thibault. We make €30 million in revenues and it’s a little small in our business. Ideally, we would be at €100 million.”

And at a national level, policymakers are also trying to play a part and encourage a Nordic model of life-long learning.

Mr Macron has put overhauling France’s system of professional training at the centre of his ambitious reform agenda to bring down France’s stubbornly-high unemployment rate and stimulate growth in the euro zone’s second-largest economy.

Between 200,000 and 330,000 vacancies were unfilled last year and the government hopes that by revamping the €32 billion annual professional training scheme, it will be able to improve workforce skills, close the skills gap and cut unemployment.

The French government in March announced that from January 2020, each worker, including those who work part-time, will be able to spend €5,000 over their careers on training courses of their choice.

The amount will increase to up to €8,000 for those with no qualifications. The measures will come on top of a €3 billion annual spending programme to train 1 million jobless and 1 million school dropouts over five years. The government has also outlined plans to create more apprenticeships and is in talks with unions and employers’ organisations about how to tighten links between benefits and training.

While employers and economists have welcomed these measures they are aware that it may be some years before the results are felt. “There’s been a number of initiatives put in place by the French government but of course you can’t whisk up skills overnight,” said Michala Marcussen, group chief economist at Société Générale. “It takes time and requires a strong dialogue between the corporate sector, professional training and higher education.”

Mr Fradet at SDEI Ouest said: “We’ve neglected certain competencies for years. Today we see a strong return to apprenticeships, but it will take several years for these people to be operational.”

In the digital sphere, major developments such as artificial intelligence, machine learning and big data are transforming skills requirements.

A 2017 report by Dell Technologies estimated that 85 per cent of the jobs that will exist in 2030 have not even been invented yet.

With this in mind, companies are fighting to adjust their workforces to the needs of the 21st-century digital economy, and the educational system is evolving to prepare the next generation to be digitally literate.

A pioneer in this space is 42, a private, non-profit and tuition-free computer programming school that was created in Paris in 2013 and takes its name from The Hitchhiker’s Guide to the Galaxy; where 42 is the answer to the ultimate question of life, the universe and everything.

Funded by telecoms billionaire Xavier Niel, who has subsequently taken his maverick establishment to Silicon Valley, the school has no teachers, timetables, or exams, and is open 24 hours a day, seven days a week. Niel is effectively the controlling shareholder in Ireland’s largest telco Eir following a takeover of the company earlier this year.

Students learn programming in a peer-to-peer environment. Other establishments are following in the vein of 42. In September Corinne Vigreux, co-founder of the navigation and map-making company TomTom, opened Amsterdam-based Codam, a not-for-profit coding college based on the 42 curriculum and ethos.

“We’re all worried about AI and the jobs of the future,” said Ms Vigreux. “I’m not worried about that so much; I think AI is a tool that will make us progress and enable innovation. But what we need is a workforce that has got the digital skills that are required.

“To work the machine, you need the man, and so what’s more important is to reform the education system to make sure that we raise the digital skill set for the workforce of the future. That’s what I’m doing with Codam.”

In the next three years, Codam plans to welcome up to 500 students between the ages of 18 and 30 at its new building in central Amsterdam.