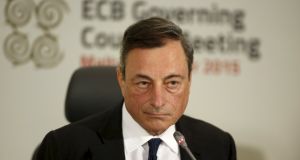 The European Central Bank looks set to inject fresh stimulus into the euro zone’s economy on Thursday after its president, Mario Draghi, said he and his policymakers would “do what we must” to return inflation from its current level of 0.1 per cent to the target of less than 2 per cent “as quickly as possible”.

Draghi’s hints at action have been so strong that doing nothing would risk huge disappointment in financial markets.

A slowing recovery and lacklustre inflation present a compelling case for doing more for most of the rate-setting governing council, despite staunch opposition from German policymakers and a handful of others on the 25-strong committee.

Since late October, officials from across the single currency area have congregated in Frankfurt to brainstorm on what the central bank could do. The fruits of those discussions are set to reach members of the governing council over the next few days.

Here are five changes the ECB could make. The most likely course is a mix of some, or even all, of the five.

The ECB unleashed its first quantitative easing programme in January this year, pledging to buy about €60 billion of bonds a month from March 2015 until September 2016, at which point policymakers expect inflation to be on a steady path towards 2 per cent.

Central bankers are adamant that purchases made so far – up until the beginning of last week the ECB had bought €582 billion out of a planned €1.1 trillion – have helped thaw credit markets. But growth remains lacklustre and inflation has failed to pick up as much as the ECB had hoped.

The governing council has already changed its tone on the September 2016 deadline, saying it would carry on buying until then “or beyond, if necessary” in its previous two post-meeting statements.

Those four extra words do not sound like much of a commitment. But even the slightest of shifts in central banks’ rhetoric offer signs on where policymakers will head next.

To keen ECB-watchers, the shift is a big clue that an extension past September 2016 is likely.

The ECB’s top officials have made it clear they think QE is working. The concern is that it is not working fast enough.

The central bank’s staff are next week set to publish projections showing inflation failing to reach policymakers’ target by 2017. Inflation has already been at under 1 per cent for two years. Some, though not all, on the governing council think the length of time inflation is set to remain below the threshold has undermined their credibility to return inflation to target.

One possible fix would be to beef up quantitative easing by buying more bonds now.

One option would be to broaden QE by buying different types of assets.

While most central banks have stuck to buying mainly government or quasi-government bonds with a smattering of corporate debt purchases, straying into riskier asset classes is not without precedent.

The Bank of Japan purchases exchange traded funds and property, in the form of Japan real estate investment trusts, as part of its QE programme.

The ECB became the first central bank to stray into negative territory when it cut its deposit rate below zero last year.

When the ECB raised to 0.2 per cent the rate it charges on a portion of deposits held at the central bank, policymakers thought that was the limit. Deeper cuts by central banks in Scandinavia and Switzerland have prompted a rethink.

As the US Federal Reserve prepares to raise borrowing costs, another rate cut would almost certainly weaken the euro against the dollar. It would also help extend the pool of assets the ECB could buy under QE by enabling central bankers to buy bonds with lower negative yields. At present, there is a ban on buying anything with a yield below minus 0.2 per cent.

Several analysts expect the deposit rate to fall by 10 basis points, with some expecting a steeper cut.

There has been a new strand to the recent arguments voiced by Draghi and his chief economist, Peter Praet: the need for speed. Both have pressed home the message that the ECB should not only convince markets it can hit its inflation target, but that it can do so quickly.

That argument could crystallise into a bolder rhetorical stance, with the ECB bolstering so-called “forward guidance” to guide public and market expectations about how aggressively they intend to prop up the economy.