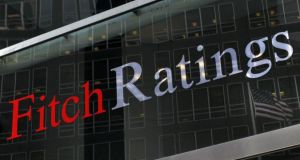 The pace of rating upgrades in the euro zone will be slower in future as fiscal progress remains sluggish, Fitch’s global head of sovereign ratings James McCormack said today.

Fitch, Moody’s and Standard & Poor’s have in recent months upgraded the ratings of peripheral euro zone countries such as Ireland and Spain as the bloc emerged from recession and concerns about the sovereign debt crisis receded.

“To move the ratings higher from here it’s not going to depend on where the bond market trades and where the yields are,” Mr McCormack told Reuters Insider Television.

“It’s going to be on the credit fundamentals. And there we’re not seeing a whole lot of progress on the fiscal side so that’s going to be a much slower progress.

Earlier this month, Standard & Poor’s became the first major rating agency to restore an A rating to Irish sovereign debt since the country’s return to the bond markets.

In a significant boost to the Government, the agency raised Ireland’s credit rating by one notch to A- from BBB+, with a positive outlook.

It cited an improved outlook for growth and more signs of recovery in the domestic economy as the rationale for its upgrade.

In May, rival agency Moody’s upgraded Ireland’s credit rating for the second time in six months , citing the recent pick-up in economic growth, which it said would improve the Government’s debt metrics.