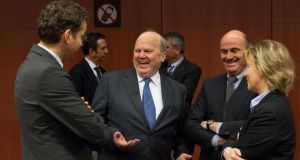 Minister for Finance Michael Noonan has said the Government’s intention to sell its stake in Allied Irish Banks will not preclude any potential retroactive direct recapitalisation of the banks.

Speaking in Brussels yesterday, the Minister said the Government planned to use the yield from any sale of its equity in the bank to pay down Government debt.

Any retroactive direct recapitalisation by the euro zone’s rescue fund is likely to involve the ESM taking a direct equity holding in the Irish banks.

While a decision on the application of direct recapitalisation will not be made until the Single Supervisory Mechanism is in place towards the end of the year, the euro group will finalise the framework for the direct bank recapitalisation instrument next month.

Equity sale
Last week, the Minister confirmed the Government intended to sell its stake in AIB before the next election.

Mr Noonan travels to New York today to meet investors in Government bonds, after a similar trip to London in December.

The post-bailout trip aims to “continue to encourage American investors to buy Irish bonds as they’re doing already”, the Minister said, highlighting that a number of events had taken place since his last US trip, including the Moody’s upgrade. “We’ve a good story to tell.”

Around 25-30 investors are expected at a lunch hosted by the National Treasury Management Agency in New York.

Euro zone finance ministers gathered for their first meeting of 2014 yesterday. It was the first euro group gathering since Latvia joined the single currency on January 1st.

Speaking after the meeting yesterday evening, euro group head Jeroen Dijsellbloem said while the situation in Greece had been discussed, more work needed to be done before the latest disbursement of funds could be sanctioned by the group.

“I’m sorry to say the review is not yet concluded, and further work is needed in Greece before the troika can return to Athens,” he said, adding that “only on the basis of a positively concluded review” will the process move forward.

With Greek bond yields rising yesterday amid the emerging market sell-off, Mr Dijsellbloem said he was not concerned about the impact of this market activity on the peripheral euro zone countries.

Contagion
“I’m not particularly worried about the risk of contagion from emerging markets. I think the position of the euro zone is different, and we have to maintain our progress, and that we are delivering.”

However, EU economics commissioner Olli Rehn said the persistent low inflation in the euro zone was a concern.

While the Portuguese finance minister provided an update on the Portuguese bailout programme, the head of the euro group said that a discussion on Portugal’s bailout exit strategy would take place closer to the end of the programme, which is due to expire in May.

Clean exit
Speaking on his way into the meeting, Mr Noonan rejected claims that Ireland’s ‘clean exit’ from the bailout had made it more difficult for Portugal to exit its rescue programme.

“I think we’ve helped them actually,” the Minister said, pointing out that Portuguese borrowing costs have fallen as a result of the Irish upgrade last week.

“It will be a decision for the Portuguese government and we’ll give them every support because they’ve been quite helpful to us in the past . . . I don’t think Portugal should be influenced or pushed around by anybody.

“They’re positioned best to know what’s in the best interest of Portugal.”

‘If you don’t like challenges, you should not be in the airline business’ 15:05
Pessimistic sentiment over climate change and trade grips business 14:57
No digs at Davos? Shivering to highlight homelessness 13:35
US wants trade deal done with Britain this year, Mnuchin says 13:35
Steinhoff’s European unit attracting interest for buyout 13:26

1 Cosgrave should give his speech to Web Summit’s partners in Saudi Arabia
2 Paschal Donohoe's biggest regret: 'Not managing the National Children’s Hospital better'
3 Ryanair wants Irish courts to block Skyscanner from selling its flights
4 Election proposals may make the housing crisis worse
5 Pessimistic sentiment over climate change and trade grips business
6 Who are Ireland’s 17 billionaires?
7 US wants trade deal done with Britain this year, Mnuchin says
8 MEPs reject Central Bank’s Gerry Cross for key banking role
9 ‘If you don’t like challenges, you should not be in the airline business’
10 Davos 2020: Worlds of Trump and Thunberg collide on a Swiss mountainside
Real news has value SUBSCRIBE