Europe will not become a bigger Germany. It is foolish to believe it ever could 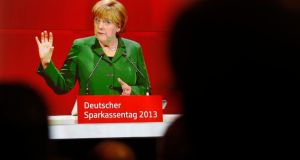 German chancellor Angela Merkel on a video screen as she addresses the audience at a meeting in Dresden recently. Photograph: Fabrizio Bensch/Reuters

Germany is reshaping the European economy in its own image. It is using its position as the largest economy and dominant creditor country to turn members of the euro zone into small replicas of itself – and the euro zone as a whole into a bigger one. This strategy will fail.

The Berlin consensus is in favour of stability-oriented policies: monetary policy should aim at price stability in the medium term; fiscal policy should aim at a balanced budget and low public debt. No whiff of Keynesian macroeconomic stabilisation should be admitted: that is the way to perdition.

To make this approach work, Germany has used shifts in its external balance to stabilise the economy: a rising surplus when domestic demand is weak, and the reverse.

Germany’s economy may seem too big to rely on a mechanism characteristic of small and open economies. It has managed to do so, however, by relying upon its superb export-oriented manufacturing and ability to curb real wages. In the 2000s, this combination allowed the country to regenerate the current account surplus lost during the post-unification boom of the 1990s. This, in turn, helped bring modest growth, despite feeble domestic demand.

For this approach to stabilisation to work well, a large export-oriented economy also needs buoyant external markets. The financial bubbles of the 2000s helped deliver this. Between 2000 and 2007, Germany’s current account balance moved from a deficit of 1.7 per cent of gross domestic product to a surplus of 7.5 per cent. Meanwhile, offsetting deficits emerged elsewhere in the euro zone. By 2007, the current account deficit was 15 per cent of GDP in Greece, 10 per cent in Portugal and Spain, and 5 per cent in Ireland.

The domestic-demand counterparts of the huge external deficits run in these countries were mostly credit-fuelled private spending.


Mistaken consensus
The mistaken consensus swiftly emerged, notably in Berlin, that this was a fiscal crisis. But that was to confuse symptoms with causes, except in the case of Greece. Yet, being deprived of access to the bond market or close to that plight, crisis-hit countries had to tighten, despite their deep recessions.

Unfortunately, the euro zone’s healthier countries also hew tightly to the stability mantra. So they too tightened fiscal positions. The IMF forecasts that the euro zone’s cyclically adjusted fiscal deficit will shrink by 3.2 per cent of potential GDP between 2009 and 2013, to end up at just 1.1 per cent of GDP. The European Central Bank also continues to show next to no interest in spurring demand.

Unsurprisingly, the euro zone economy is becalmed, with GDP at the same level in the fourth quarter of 2012 as it was in the third quarter of 2010.

Meanwhile, consumer price inflation is falling below the ECB’s 2 per cent target. Last week’s cut of a quarter of a percentage point in the intervention rate will make next to no difference.


Rebalanced fantasy
A big adverse shock risks turning low inflation into deflation. That would aggravate the pressure on countries in crisis. Even if deflation is avoided, the hope that they will grow their way out of their difficulties, via euro zone demand and internal rebalancing, is a fantasy, in the current macroeconomic context.

That leaves external adjustment. According to the IMF, France will be the only large euro zone member country to run a current account deficit this year. It forecasts that, by 2018, every current euro zone member, except Finland, will be a net capital exporter. The euro zone as a whole is forecast to run a current account surplus of 2.5 per cent of GDP. Such reliance on balancing via external demand is what one would expect of a Germanic euro zone.

If one wants to understand how far the folly goes, one must study the European Commission’s work on macroeconomic imbalances. Its features are revealing. Thus, it takes a current account deficit of 4 per cent of GDP as a sign of imbalance. Yet, for surpluses, the criterion is 6 per cent. Is it an accident that this happens to be Germany’s?

Above all, no account is taken of country size in assessing contribution to imbalances. In this way, Germany’s role is brushed out. Yet its surplus savings create huge difficulties when interest rates are close to zero. Its omission makes this analysis of “imbalances” close to indefensible.

The implications of the attempt to force the euro zone to mimic the path to adjustment taken by Germany in the 2000s are profound. For the euro zone it makes prolonged stagnation, particularly in the crisis-hit countries, highly likely.

Moreover, if it starts to work, the euro is likely to move upwards, so increasing risks of deflation. Not least, the shift of the euro zone into surplus is a contractionary shock for the world economy. Who will be both able and willing to offset it?


Doomed strategy
The euro zone is not a small and open economy, but the second-largest in the world. It is too big and the external competitiveness of its weaker countries too frail to make big shifts in the external accounts a workable post-crisis strategy for economic adjustment and growth.

The euro zone cannot hope to build a solid recovery on this, as Germany did in the buoyant 2000s. Once this is understood, the internal political pressures for a change in approach will surely become overwhelming.

Europe will not become a bigger Germany. It is foolish to believe it ever could. The euro zone will either achieve a better-balanced resolution of its difficulties or break up. Which of the two will it be? That remains the big unanswered question. – (Copyright The Financial Times Limited 2013)