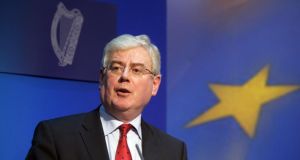 Tánaiste Éamon Gilmore will today present EU ministers with the package on the EU’s seven-year budget, which was agreed by Mr Gilmore and MEP Alain Lamassoure on Wednesday, amid continuing resistance from the European Parliament on the issue.

The Tánaiste and the European Parliament’s chief negotiator Alain Lamassoure agreed a text last Wednesday evening on the EU’s seven-year budget, but several MEPs said they could not support the compromise package as agreed.

In a letter sent to MEPs yesterday, Ivalio Kalfin, the representative of the European Parliament’s second largest group, the Socialists and Democrats group, Ivalio Kalfin said he could not support the proposal agreed by the negotiators.

“I believe that a compromise is close and possible but we need to have some more willingness from the side of the council,” the letter seen by The Irish Times stated.

The European Parliament’s budgetary committee met yesterday in Brussels to discuss the package, with various meetings scheduled to take place between MEPs over the coming days.

In the absence of a firm sign from the European Parliament that MEPs will back the deal, the Irish Presidency of the Council of the European Union is now unlikely to seek formal agreement from ministers at today’s meeting of the General Affairs Council.

If agreement is forthcoming later in the week from the European Parliament, the General Affairs Council could then adopt their position, as agreement can be reached without an official meeting being convened. This may mean that member state agreement on the process could coincide with a meeting of EU leaders later this week in Brussels.

The European Parliament will decide in the coming days whether to vote on the so-called multi-annual financial framework (MFF) at next week’s plenary session in Strasbourg.

The MFF will govern income and expenditure between the years 2014 and 2020. Since the Lisbon treaty, the European Parliament must also sign up to the package. Agreement is needed to unlock almost €1 trillion of funding across the European Union, including the Common Agricultural Policy, cohesion funding and youth guarantee initiatives.

Seeking agreement on the MFF has been one of the priorities of the Irish presidency of the Council of the European Union which is in its final week.

1 Who are Ireland’s 17 billionaires?
2 My father in a nursing home wants to gift me his house
3 Are there annual limits on inheritances or gifts to a child?
4 State subsidises public sector retirees to cover gap until State pension
5 Dublin office vacancy rate hits lowest level in 20 years
6 Pretax profits decline sharply at Tuam-based car tech firm
7 Strategic land holding in Galway city for €3m
8 Only 11.8% of website ‘cookie banners’ are complying with GDPR
9 Cubic Telecom raises more than €11 million in funding
10 Aunt has bequeathed a house intended for my son to me
Real news has value SUBSCRIBE