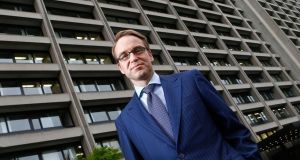 The European Central Bank has not “tied itself to the mast” with its use of forward guidance on low interest rates, and could raise them if inflationary pressures emerge in the future, ECB policymaker Jens Weidmann said today.

Abandoning its traditional policy of never pre-committing on future rates, the ECB said a week ago it would keep its interest rates at present or lower levels for an “extended period” - its first use of so-called forward guidance.

Markets are trying to assess how long this period could be.

The ECB offered some clarity in its monthly bulletin, also released today, saying forward guidance was consistent with, but not directly linked to, its decision in May to extend the full allotment liquidity policy until July 2014.

“The extended period of time over which the Governing Council currently expects the key ECB interest rates to remain at present or lower levels is a flexible horizon which does not pre-specify an end-date but is conditional on the Governing Council’s assessment of the economic fundamentals that determine underlying inflation,” it added in the bulletin.

In a speech in Munich, Mr Weidmann, a staunch defender of the ECB’s mandate to contain inflation, also stressed that the ECB’s monetary policy stance was conditional on economic developments.

He said the ECB’s expectation that interest rates would remain at record lows for an extended period was justified by a subdued inflation outlook and a weak economic environment.

But he added that the ECB’s policy move last week “is not a historic change in monetary policy communication” but simply an effort to give more guidance in a time of high uncertainty.

“It is not an absolute advanced commitment of the interest rate path,” he said in the text of his speech. “The ECB Council has not, like Odysseus, simply tied itself to the mast.”

Another ECB policymaker, Joerg Asmussen, said this week that the “extended period” of forward guidance meant “... not six months, it’s not 12, it goes beyond.”

The ECB later issued a statement saying Mr Asmussen had not intended to give any guidance on the exact length of time for which it expects to keep rates at record lows.

Mr Weidmann said low rates “are not without side effects”.

“Even if these are justified for monetary policy, we may not close our eyes to them: they can lead to reforms and necessary structural changes being deferred. Financial stability risks can grow,” he said. “These side effects increase with time in the low interest rate phase.”

The ECB took the unprecedented step of using forward guidance last week in response to market volatility, which set in after the US Federal Reserve last month set out a plan to begin slowing its stimulus.

In the monthly bulletin, the ECB also said that the scope for interest rate cuts had not been exhausted.

“The key ECB interest rates can be reduced further if warranted by the evolving outlook for price stability,” the central bank said.

Expressing satisfaction at the market reaction to its guidance move, the ECB said in its monthly bulletin that “after the Governing Council’s communication on July 4th the forward rates based on overnight index swaps have declined appreciably”.