Leaders have taken euro out of crisis despite end-of-the-world scenarios, says Schäuble 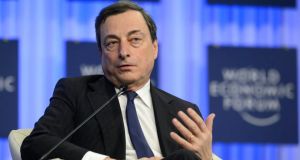 Despite a “largely positive” economic outlook for 2014, he warned of a punishing market reaction if euro countries rolled back their reforms.

“The ECB is clearly of the view there should be an accelerated time line breaking links between sovereign and banks.

“Each government is fully committed to providing money for this objective through high-level commitment by leaders and finance ministers [and] we have no doubt that this commitment will be maintained.”

Mr Draghi’s remarks are a shot in the arm for the Government which has seen its hopes for further debt relief – flagged in a June 2012 EU summit agreement – postponed by technical discussions of banking rescues combined with political cold feet in Berlin and other capitals.

Current euro calm was, said Mr Draghi, partly down to his 2012 London speech vowing to “do whatever it takes” to rescue the euro that resulted in stock markets rising 50 per cent

The speech prompted Churchillian words from Oracle chief Larry Summers: “Never before have so few words and even less action done so much for so many.”

Calming role
Mr Draghi said that political agreement on a European banking union also played a crucial calming role. With attention shifting to upcoming bank stress tests, he said he did not have any expectations for the tests except transparency.

“And, of course, that the banks that should go, should go.”

German finance minister Wolfgang Schäuble told another Davos audience that European leaders had taken the euro out of crisis “despite all the end-of-the-world scenarios”.

Praising reform efforts from Ireland to Greece, he added: “Europe is no longer the centre of worries about the stability of the global economic development.”

“The right to move in Europe and apply for jobs in other European countries...should not be a right to go and claim benefit,” he said, saying further EU reform would make winnable a British referendum on membership.

Continuing his Davos campaign, Taoiseach Enda Kenny said the EU would be “much weaker” without Britain.

On Bloomberg television he said his Government had delivered on its mandate “to take our country out of an unholy economic mess that we had inherited”.

Facebook executive Sheryl Sandberg told the audience that, in her view, the only country she knew with all factors needed to maximise its potential for recovery and growth was her company’s international base: Ireland.