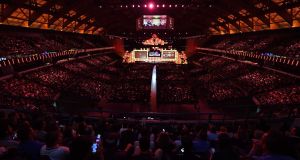 Tim Berners-Lee was speaking at the opening of the Web Summit conference in Lisbon, where 23 conferences are taking place across nine main stages and an estimated 1,200 speakers are expected

There is no wavering in Dublin’s opposition to proposals for an EU Digital Sales Tax, Minister for Finance Paschal Donohoe insisted ahead of an EU meeting of finance ministers, Ecofin, in Brussels that will debate the issue this morning.

French and Commission sources claim that the tide is turning in favour of the proposal for a sales tax on the giant digital companies against which Ireland, under increasing pressure, has been leading the charge. The proposals, which the Commission hopes to have approved in December, require unanimity.

Online users are seeing their rights and freedoms threatened by big tech, according to the inventor of the World Wide Web Tim Berners-Lee. He has launched his “contract for the web” which will require internet companies to respect data privacy and “support the best in humanity”. Berners-Lee was speaking at the opening of the Web Summit conference in Lisbon, where 23 conferences are taking place across nine main stages and an estimated 1,200 speakers are expected, including Twitter co-founder Evan Williams and former British prime minister Tony Blair. Charlie Taylor is reporting from the event this week.

“As globalisation deepens, the practices of law of jungle and winner take all are a dead end.” That’s according to Chinese president Xi Jinping, who took a swipe yesterday at Donald Trump over a bitter trade war between the world’s two biggest economies. He was opening the world’s biggest trade fair in Shanghai.

The Republic is at least five years out of step with the UK for broadband provision and more than a decade behind other European countries that have invested heavily in fibre-to-the-home technology. That is according to the authors of a new report, which ranks Ireland among the most expensive countries in the world for broadband.

Just 60 affordable home loans have been drawn down right across Dublin city and county, new figures show, despite more than 1,000 applicants for the scheme which launched last February. The figures, seen by The Irish Times, also show that more than one in two applicants are failing to secure approval right across the capital for the scheme, with a success rate of less than 20 per cent in Dún Laoghaire Rathdown.

Cantillon predicts difficult times ahead for bookmakers. In October, Minister for Finance Paschal Donohoe doubled the betting duty to 2 per cent and from 15 to 25 per cent on the commission earned by betting intermediaries or exchanges. “What does seem certain is that gambling is going to be an increasing focus in the years ahead for policy makers, as has been the case for the alcohol industry over the past decade or so.”

Ever heard of “house hacking”? Well in Your Money, Fiona Reddan explains explains the latest investment craze, which lets you rent rooms to tenants who pay your mortgage for you. Meanwhile Proinsias O’Mahony considers the case for having some exposure to emerging markets, even if there’s a lot of pain there at present.

Finally, in her media column Laura Slattery looks at the media’s pursuit of young twentysomething online users in the hope their greater willingness to pay for news will prove the paywall and subscription models can be profitable.