Overcorrection in wake of property crash still to work itself out, research finds 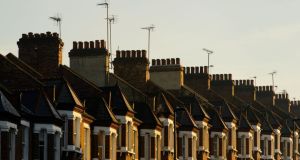 Based on a study of the Irish housing market over three decades, the ESRI said prices – which rose by nearly 16 per cent in Dublin and 6 per cent nationally last year – had still not fully recovered from the preceding period of economic upheaval. Photograph: Dominic Lipinski/PA Wire

House prices are still undervalued by up to 27 per cent despite the recent recovery in market values, according to the Economic and Social Research Institute (ESRI).

Based on a study of the Irish housing market over three decades, the institute said prices – which rose by nearly 16 per cent in Dublin and 6 per cent nationally last year – had still not fully recovered from the preceding period of economic upheaval.

The study was contained in the ESRI’s latest economic commentary, which this morning delivered another upbeat assessment of Ireland’s recovery, predicting growth of 3.4 per cent this year and 3.8 per cent in 2015, with unemployment falling to below 10 per cent next year.

In its study of the housing market, the think tank calculated what it called the fundamental level of house prices using key economic variables, such as income levels, interest rates, unemployment and the quantity of housing stock.

It then compared this with actual price data from the Central Statistics Office to see if current prices were undervalued or overvalued.

The analysis only covers the period up to the end of last year and does not take into account the further price increases this year. It also makes the point that prices in Dublin, which has seen the biggest recent increases, are not as undervalued as those in other parts of the State.

The ESRI’s analysis showed that, at the peak of the housing boom in 2006, prices were overvalued by between 25 and 35 per cent. In late 2005, the OECD warned that the property market was dangerously overheating, with prices overvalued by at least 20 per cent. At the time, the warning was roundly criticised as inaccurate and went unheeded.

Population growth alone will require about 25,000 houses to be built annually, it said, whereas only 15,000 are projected to be built next year.

The report’s author, Kieran McQuinn, dismissed any suggestion that the recent level of price growth constituted another bubble. He said the stock of mortgage credit is still falling while the level of transactions was still registering negative growth. But he did warn that a prolonged period of sustained price growth could turn it into a bubble.