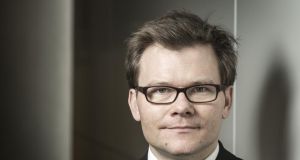 Carsten Schneider: the SPD finance spokesman said any move to recapitalise Irish banks would require all ESM member states to approve additional funding for the purpose. “That will never happen,” he said. Photograph: Thomas Koehler/Getty Images

Senior Bundestag figures in Berlin have said the ESM bailout fund’s new power to recapitalise banks – in the future and retroactively – is a political “fig leaf” that will never benefit Ireland.

Their resistance comes a day after the cabinet signed off on legislation that would allow the ESM to take direct stakes in ailing banks in the future and established a principle of agreeing to do doing so for bank recapitalisations in the past.

Two years after EU leaders agreed to break the link between banking and sovereign debt, legislation to make that happen is on its way to the Bundestag. Approval is likely from chancellor Angela Merkel’s grand coalition four- fifths majority.

“Agreeing to direct bank recapitalisations is a fig leaf for the chancellor as she agreed to it in June 2012 without having a Bundestag mandate,” said Mr Carsten Schneider, deputy parliamentary chairman of the SPD and a finance spokesman. “It will never be used retroactively.”

The party’s finance spokesman said any move to recapitalise Irish banks would require all ESM member states to approve additional funding for the purpose. “That will never happen,” he said.

The SPD has always linked Irish calls for further European fiscal solidarity to a gesture from Dublin on fiscal matters – to date unforthcoming.

They feared the June 2012 summit agreement, to break the link between sovereign and bank debt, would turn the bailout structure – already unpopular in Germany – into a beggar-thy-neighbour game for the EU periphery’s ailing banks.

As a result, Berlin insisted on the establishment of a so-called “liability cascade” being established – forcing member states to exhaust all other sources of funding including bank creditors and investors – before going to the ESM.

“These new recapitalisation tools will be used very restrictively or not at all,” said a senior CDU finance figure. “More importantly we don’t want to see this being used for any old liabilities.”