Efforts to build world economy limited by lack of languages 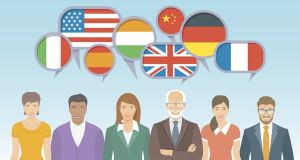 At a conference in Dublin marking the 15th anniversary of the Business German in Ireland (BuGI) working group, a call for early foreign language teaching was backed by almost all speakers

Ireland’s efforts to build a globalised economy are unsustainable in the long run, given its failed foreign language education policy, particularly in German, according to Irish business leaders and academics.

Heads of multinational companies operating in Ireland say they cannot understand why they are forced to go outside the state to recruit the thousands of multilingual staff they need.

Employers organisation Ibec, meanwhile, said Ireland’s foreign language failure was “the most intractable of policy challenges” that was hobbling growth potential of both home-grown companies and of the Irish economy.

“Ireland’s indigenous sector has psychologically switched off to certain markets and they don’t got further for cultural and linguistic reasons,” said Tony Donohue, head of education and social policy at Ibec. “Ireland’s globalised business model is not sustainable . . . unless we get an indigenous exporting base.”

The warning came at a conference in Dublin marking the 15th anniversary of the Business German in Ireland (BuGI) working group, representing more than a dozen third-level institutions in Ireland teaching German.

Speakers at the conference in the Royal Irish Academy said closing the gap between Irish aspirations and the Irish reality in language teaching could bring a considerable economic boost.

Swiss ambassador to Ireland Marie-Claude Meylan said studies had quantified her country’s multilingualism – in particular German, French and Italian – as being responsible for a 10 per cent share of the national economy worth Swiss francs 642 billion (€587 million) in 2014.

Leading business lobby groups in Ireland said thousands of job vacancies could not be filled with Irish graduates because of their chronic lack of German and other languages. “The reality is that we are going to Germany to recruit Germans for roles in Ireland, an absurd situation,” said Ralf Lissek, chief executive of the German-Irish Chamber of Industry and Commerce.

A fresh push for early foreign language teaching was backed by almost all speakers at the conference. Damien Owens, registrar of Engineers Ireland, said just one or two of 21 engineering courses in Ireland offered a language component, meaning that Irish engineering graduates were missing out on ease of labour mobility within Europe.

1 In six months we will be in the grip of a 1980s-style recession
2 Angela Merkel sweeps in to save the euro zone
3 Mortgage approvals tumbled in first full month of lockdown – BPFI
4 Property price drop of up to 12% this year a ‘reasonable’ assumption – McDonagh
5 Facebook looks increasingly immoral and thoughtless
6 Ryanair to process all Covid-19 refunds within 10 weeks, Michael O’Leary says
7 Cork-based AI supply chain company Keelvar raises $18m
8 Chartered Land moves closer to approval for Dublin’s tallest tower
9 Ibec warns ‘conservative’ lifting of lockdown will make downturn worse
10 Retailers ‘asked to work almost like hospitals’ during reopening
Real news has value SUBSCRIBE