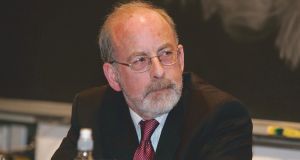 er to the British Labour Party, told Dublin economists last night that the European Central Bank (ECB) was to blame for the level of austerity in Ireland during the financial crisis.

In a discussion chaired by outgoing Central Bank governor and ECB member Patrick Honohan, Mr Wren-Lewis said the ECB should have “done its job” earlier to act effectively as a lender of last resort. He said that if the ECB had done this, it would have led to “a more modest fiscal consolidation” in stressed euro-zone countries.

Mr Wren-Lewis said an ECB bond-buying programme initiated in 2012 should have begun in early 2010 before the crisis in Europe got out of control.

Mr Honohan, who was on the ECB’s governing council throughout this period, said: “Some lawyers said the ECB couldn’t do it earlier, but they were wrong.”

He said an earlier stimulus across Europe should have been allowed to take effect, along with a rise in interest rates. If Governments had waited to cut back spending until economies recovered, and timed this to coincide with a cut in interest rates, this would have avoided high unemployment and painful austerity.

Mr Honohan argued that there was a very real threat to Ireland of bond investors refusing to buy Irish debt. Mr Wren-Lewis said this threat was overplayed, and that the media listened too closely to economists of financial institutions, who “play up the unpredictability of the market”.