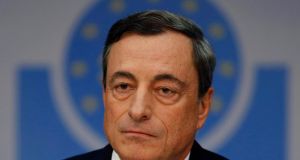 President of the European Central Bank Mario Draghi: The main message is that our balance sheet will keep expanding in the coming months. Photograph: Kai Pfaffenbach/Reuters

The European Central Bank is ready to inject up to €1 trillion of new liquidity into the euro zone economy as it ramps up efforts to rescue the single currency bloc from the risk of Japanese-style deflation, Mario Draghi confirmed yesterday.

The ECB president also said the central bank’s governing council was unanimous in its commitment to use further unconventional tools, including quantitative easing, should economic conditions deteriorate. He added that the central bank had stepped up its preparations in this regard.

Mr Draghi’s comments will boost expectations that the central bank will swell its balance sheet in a bid to convince the public it is serious about turning inflation from 0.4 per cent to its target of just below 2 per cent.

They will also help to dispel fears that the governing council has been split over the need to press ahead with unconventional measures to fight economic stagnation.

“The main message is that our balance sheet will keep expanding in the coming months . . . under all universes,” the ECB president said.

Mr Draghi said in September that private-sector asset purchases and cheap four-year loans would increase the size of the ECB’s balance sheet to levels last seen in early 2012, implying up to €1 trillion in fresh liquidity. But he appeared to backtrack on this goal after last month’s meeting in Naples.

The bank’s opening statement on the expansion of the balance sheet will ease concerns that Mr Draghi had lost the support of some council members on this objective. The ECB president clarified that the central bank wanted to return its balance sheet to levels last seen in March 2012, when the ECB owned €980 billion more in assets than it does today. The ECB started to buy private-sector assets in late October and has purchased €4.8 billion worth of covered bonds. It has also announced that four private-sector asset managers will begin buying asset-backed securities on its behalf this month.

Worries over possible splits within the ECB’s top body were stoked by a Reuters report this week claiming some policy makers would challenge the president over a leadership style that was less collegial than that of his predecessor, Jean-Claude Trichet. Mr Draghi denied any divisions, pointing out that the ECB’s introductory statement had been signed by all members of the governing council.