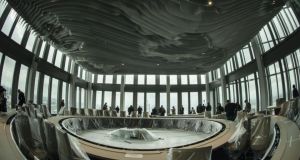 The council meeting room of the new headquarters of the ECB in Frankfurt, Germany, during construction. Photograph: Thomas Lohnes/Getty Images

Starting this weekend, more than 2,600 central bankers will move house this month, when the European Central Bank finally opens its new headquarters after three years of delays. But the 45-storey glass towers next to the River Main will not have enough space to house all of the central bank’s staff.

The switch from the Eurotower, a skyscraper in the heart of Frankfurt’s financial district, to the city’s Ostend has taken 12 years and three ECB presidents to complete. Since then, the central bank’s remit has expanded from warding off inflation to include guarding against the excesses of the euro zone’s biggest banks.

While building will house all staff responsible for monetary policy, including all six members of the top-ranking executive board, the lack of space means the supervisors will remain in the Eurotower.

The ECB had originally expected to complete the new building in 2011 and to spend €850 million on the project. But a three-year delay has led costs to spiral, pushing up the price to as much as €1.2 billion.

The extra costs include a rise in the price of construction materials and building, a change in contractor and difficulties in working on a site, which features an old listed building, the cavernous Großmarkthalle, built in the 1920s to house a fruit and vegetable markets.

The ECB defended the decision to undertake the project, arguing it was a waste of public money to carry on renting space in the Eurotower. Property researchers Jones Lang LaSalle said the ECB was paying between €30 and €35 a metre for the 60,000sq metre site.

“It is in the long-run more cost-efficient [for the ECB] to own its premises than to rent. This has also been a recommendation from the European Court of Auditors to all European institutions,” a spokeswoman for the ECB said. “The new premises are a modern, functional and sustainable headquarters, built to our needs and offering flexibility.”

Wolf Prix, of Coop Himmelb(l)au, the architects behind the project, said: “It is a functional building – bridges between one office slab to the other enable fast transitions. The platforms work as lobbies on different levels, allowing informal communication.”

The most important conversations will happen on the 41st floor of the south tower, where the governing council will meet in a room with a ceiling depicting a map of Europe.

Visitors will enter through the Großmarkthalle, which will house a conference centre and library in its 12,500sq metres. A press area juts out from the side of the old building.

From the river, the geometry of the glass panels reflect the light in a way that makes the towers look different on each appearance. On a foggy day in autumn, the building looks drab. But when the sun is out it becomes more impressive, revealing the atrium and reflecting the azure skies.

Stefan Mohr, a social worker who has lived in Ostend for 10 years, said the building’s ability to magnify the weather meant he veered from loving it to hating it. “Sometimes I think ‘wow’, sometimes I think it’s boring. The building is always changing; you never get the same view,” said Mr Mohr.

The decision to build away from the banks in the under-developed Ostend has drawn a mixed response. Frankfurter Rundschau, a local newspaper, has published residents’ complaints that the area has already become more expensive.

Mr Mohr says rents have increased, but also thinks the project could have a positive effect. “It’s a little more international here and that’s not a bad thing. I hope the people working there will integrate into the local area and that there’s a sense of community.” – (Copyright The Financial Times Ltd 2014)