Growth and inflation risks are on the rise in the euro area, bank says 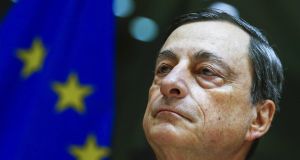 Growth and inflation risks are on the rise in the euro area, the minutes of the European Central Bank’s January meeting showed, and some policymakers are advocating the need to act pre-emptively in the face of new threats.

Low inflation could become embedded, with poor wage growth already suggesting that weak crude prices are feeding into other prices, while China’s turmoil was also clouding the outlook as the risk of a hard landing for its economy rose, the ECB said on Thursday.

Although the ECB left rates unchanged in January, it promised to review and possibly recalibrate its policies on March 10th, a statement understood by markets to mean that policy easing is highly likely.

Analysts polled by Reuters expect a 10 basis point deposit rate cut and a tweak of the ECB’s €1.5 trillion asset buying programme in March, while markets see more than 20 basis points worth of rate cuts this year.

“There were stronger signs again that repeated downward revisions of the inflation outlook were feeding through to inflation expectations, which had again increased the probability of the euro area economy remaining in low inflation environment for an extended period of time,” the ECB said in the minutes of the January 21st meeting.

“Weaker than anticipated growth in wages, in conjunction with declining inflation expectations, could also signal increased risks of second-round effect,” it said.

The ECB is trying to push inflation, now running around zero, back towards 2 per cent but low energy prices, lacklustre growth and weak lending growth are expected to keep inflation well below target for years to come.

Although countering an oil price shock is difficult, the ECB is fighting the so-called second-round effect of the oil price fall, fearing that low inflation could become embedded.

“A point was made that, in a situation in which risks were predominantly on the downside and new downside risks were emerging, it would be preferable to act pre-emptively ... rather than wait until after risks have fully materialised,” the ECB said.

“More lasting deviations (from the inflation target) could be misinterpreted as a lack of willingness to act or as a lack of effectiveness of monetary policy,” it added.

Although the ECB was relatively relaxed about China’s outlook in December, the mood appears to have shifted amid the market volatility.

“In China, the ongoing economic rebalancing, which was in itself desirable and in line with past calls from the international community, could turn out to be more pronounced than expected and trigger a hard landing,” the ECB said.

The ECB’s Governing Council also noted that greater emphasis had to be placed on communication, offering reassurances that the bank had plenty of instruments and there were no limits as to how far it was willing to deploy these.

The ECB already cut its deposit rate in December and extended its 60-billion-a-month asset buying programme but much of the effect of its policy easing has been reversed by tighter financial market conditions.

Euro zone bank shares are down by a fifth since the start of the year, increasing the cost of capital for banks and potentially holding back lending, reducing the effectiveness of quantitative easing.

1 Knock gets visit from world’s largest passenger plane
2 A maverick taking on the Irish whiskey establishment
3 Will Avolon find itself on the block as China prepares to seize troubled parent HNA?
4 Why Sweden ditched its negative rate experiment
5 How do you know if you are wealthy? It’s not straightforward
6 How can I view my dead brother’s will if I’m not the executor?
7 Nineteen staff made redundant by Nama share €1m
8 Dr Pepper owner in talks to take over former Lidl distribution centre
9 T-Mobile and Sprint strike new deal terms
10 Accumulated profit falls at Joe Duffy’s media company
Real news has value SUBSCRIBE