Average monthly rents in and around north inner city Luas over €1,800 a month 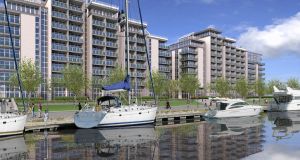 Dublin’s Spencer Dock is the most expensive place to rent on either the Luas or the Dart line, according to a new price survey.

Average rent in the area, which is adjacent to Dublin’s financial centre and across the river from the city’s tech hub, was just over €1,800 a month.

This was higher than anywhere elsewhere on the Luas line and even eclipsed rents in the upmarket suburbs of Sandymount and Dalkey.

Click or hover on a Luas/Dart station to see average monthly rent for two-bed apartments. Use the layer selector window to get a different view of rent levels.

Following on from last week’s Dublin Rail house price map, Daft.ie’s rental equivalent highlights the most and least expensive areas by stop on both the Luas and Dart lines. The map is based on asking prices for two-bed apartments and is derived from a survey of 23,500 properties.

Daft.ie economist Ronan Lyons said: “These maps showing average rent by rail station reveal interesting patterns, for example how much more people pay in rent for a two-bedroom when living close to the city centre or the coast. . . Many people will not be familiar with all parts of Dublin, particularly those moving to Dublin from elsewhere . . . This map – and updates to include for example the Luas Cross-City when it opens and core Dublin Bus services – will help all those looking for a home.”