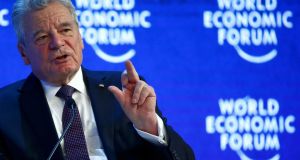 German president Joachim Gauck at Davos. He said refugee crisis presents the European Union’s with its “biggest ever threat” as he warned that limits would be introduced on refugees arriving in Germany. Photograph: Ruben Sprich/Reuters

German president Joachim Gauck has warned that the refugee crisis presents the European Union’s with its “biggest ever test” as he warned that limits would be introduced on refugees arriving in Germany.

In a keynote speech at the World Economic Forum in Davos Mr Gauck said that, while Germany would continue its obligation to offer refuge to those in need, he warned that “solidarity is not infinite.”

He added that politicians “must have the ability to think forward” in order to bring their citizens with them on the refugee issue.

“It appears therefore that migration is politically viable only to the extent that citizens are willing to accept it. People must believe that politicians have the ability to think forward and that the citizens are prepared to go along with and accept the change.”

Nonetheless he defended Germany’s response to the refugee crisis in the summer and autumn of 2015, noting that for older German people in particular, it was important “to show solidarity, to show that we would never again become xenophobic or racist.”

The obligation to offer refuge to those in need was not only inscribed in the Geneva Convention, it was also contained with the German constitution, he said. Referencing the work of economist John Kenneth Galbraith, he highlighted the economic benefit of migration to the receiving country.

Mr Gauck’s intervention on the refugee issue comes as political debate in Germany intensifies over German chancellor Angela Merkel’s handling of the issue. The German Chancellor cancelled her regular visit to the World Economic Forum earlier this month, due to domestic political concerns.

The German president said that, while migration is not a new phenomenon, almost 60 million people are currently fleeing their homelands, many at great danger to their own lives. “The hundreds of thousands arriving are presenting the European Union with its biggest ever test,” he said.

In an implicit reference to the New Year’s Eve sexual assaults in Cologne he said that “not all migrants have espoused all the fundamental European beliefs” , including the perspective on the role of women in society, noting that “migration and integration must be thought of in tandem.”

Mr Gauck also urged the European Union to preserve the integrity of the Schengen code and not to “retreat into national solutions” to the refugee crisis.

He noted that a growing number of people in Germany were not ruling out the reintroduction of national border checks as a solution to the crisis.

“A good solution would not be the loss of this freedom of movement. Can we not come up with a better idea than this?”