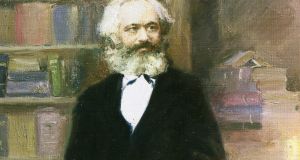 Karl Marx: his warning that history repeats itself first as tragedy and then as farce has modern application. Any populist government in Europe might succeed in raising growth with banking policies – but this make them so dangerous. Photograph: Imagno/Getty

Rereading John Weitz’s biography of Hjalmar Schacht, Hitler’s Banker, I noted some interesting parallels between the 1930s and now that I had not considered before. It is well-known Hitler relied on Schacht, his central banker, to help fund his rearmament plans. But Weitz also pointed out – and this is potentially relevant to the situation in the euro zone today – that Schacht was only able to pursue his unorthodox policies at the Reichsbank because he had the backing of a dictator.

If an extremist leader came to power in a large euro zone country – France or Italy, say – what would happen if they were to appoint a central banker with the acumen of Schacht? And what would be the chances that such a team could succeed in increasing economic growth in the short term?

I am not comparing anyone to Hitler – or indeed to Schacht. My point concerns what an unorthodox central banker can do if he or she has the political support to break with the prevailing orthodoxy.

On returning to the Reichsbank, Schacht organised a unilateral restructuring of private debt owed by German companies to foreigners. The German economy had already benefited from withdrawal from the gold standard in 1931, and Schacht piled stimulus upon stimulus. One reason for Hitler’s initial popularity in Germany was the speedy recovery from the depression, which was no doubt helped by a loose fiscal and monetary policy mix.

The current policy orthodoxy in Brussels and Frankfurt, which is shared across northern Europe, has some parallels to the deflationary mindset in the 1930s. Today’s politicians and central bankers are fixated on fiscal targets and debt reduction. As in the early 1930s, policy orthodoxy has pathological qualities. Whenever they run out of things to say, today’s central bankers refer to “structural reforms”, but never say what such reforms would achieve.

In principle, the euro zone’s economic problems are not hard to solve: the European Central Bank could hand each citizen a cheque for €10,000. The inflation problem would be solved within days. Or the ECB could issue its own IOUs – which is what Schacht did. Or else the EU could issue debt and the ECB would buy it up. There are lots of ways to print money. They are all magnificent – and illegal.

There are no Nazi parties in the euro zone today, except in Greece. But France and Italy have populist parties on the right that are clearly outside the current policy consensus. Imagine a scenario in which Beppe Grillo, leader of Italy’s Five Star Movement, were to win the Italian election in 2018.

The term of Ignazio Visco, governor of the Bank of Italy, expires in November that year. Mr Grillo would be in a position to appoint his own central banker. Perhaps he would choose someone as resourceful and ruthless as Schacht and able to plot Italy’s way out of the euro, via a parallel currency regime for a transitional period, defaulting on foreign debt in the process.

The devaluation and the increase in public sector investment possible under a new regime could bring instant growth.

I have no doubt any populist government in Europe would end in disaster but they might succeed in raising growth, and this makes them so dangerous. We should not expect an exact rerun of the past, however. As Karl Marx put it, this will be history repeating itself first as tragedy, then as farce. Even this cuddlier version of the 1930s would be a tragedy of sorts. The period of ever-closer union in Europe would be over and the euro experiment would have ended in failure. – Copyright The Financial Times Limited 2016