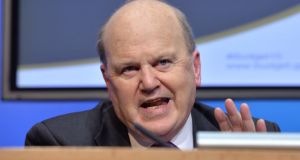 Minister for Finance Michael Noonan has argued the granting of an extension to France to curb its deficit should be followed by the application of similar flexibility for smaller countries. Photograph: Alan Betson/The Irish Times

The Irish Fiscal Advisory Council’s intervention in the debate on budget “flexibility” comes as the Government presses the EU powers for a speedy resolution of the question. Although recent signals from Brussels are broadly supportive, Dublin wants a settlement in time for the spring economic statement later this month.

At issue is a series of technical and political questions. In sum, the Coalition wishes to spend a little more next year and tax a little less than permissible under a strict reading of reinforced European budget rules. In the background is the return of growth to the economy and, inevitably, the election to come.

Furthermore, Minister for Finance Michael Noonan has argued that the granting of an extension to France to curb its deficit should be followed by the application of similar fiscal flexibility for smaller countries, such as Ireland.

But why the fuss? Have we not heard for months that Ireland’s budget deficit this year is set to drop below 3 per cent of economic output?

The basic aim is to prevent another build-up of frailty in the public finances. But the Government is concerned that current application of the rules is not practical and could, if followed to the letter, have a negative effect on the recovery.

The publication tomorrow of exchequer returns for the first quarter of the year will provide a further opportunity to measure the extent of the turnaround in the public finances. Such data will set the scene for the start of “pay recovery” talks with public unions, and for talks within Government on a new capital investment plan that will follow the spring statement.

This is the maelstrom into which arrives the Irish Fiscal Advisory Council’s “analytical note” on the implications of the expenditure targets for the budget in October. Albeit with caveats, the council essentially supports Dublin’s request for a modest degree of leeway to lift preordained expenditure targets. This is justified by the ongoing advance in potential growth, unforeseen in key expenditure calculations which remain distorted by the severe contraction of the Irish economy in the aftermath of the crash.

Yet even if the spending targets are relaxed a little, the council warns that the scope for any discretionary tax cuts in the October budget is “limited”. Indeed, the council says that tax cuts would further tighten the amount of allowable expenditure in a scenario in which the State is facing pressure across the board on public services. That remains an important point. While the council is warm on expenditure leeway, it is decidedly cold on the taxation side of the scales.

First, an averaging formula based on a 10-year moving average of measured and projected growth rate leads to estimated potential growth that is much lower than current estimates.

Second, the chosen definition of public spending excludes the effect of changes in the cost of servicing the national debt.

Third, revenue changes as a share of economic output are included only when they follow discretionary tax changes.

“For the current Irish situation . . . the averaging formula and compounding effects of the advance setting of the benchmark and revisions to potential gross domestic product growth are producing a severe distortion,” says the council.

All of this serves to boost the Government’s case as it argues in Brussels to ease the limitations on spending. True, there is little enough patience in political circles for claims that increased spending heralds the return of bad habits. Still, the council’s note supports the argument that the present application of the framework which is supposed to keep budgets in good order is itself deeply flawed.

1 Irish people like nothing more than being bribed with their own money
2 Climate apathy in Northern Ireland could impact on the Republic
3 Ministers ditch Davos for electorate’s doorsteps
4 The Irish economy is thriving but if you’re not feeling it – here’s why
5 Pointy sale: How a Google reject built a $160m company and sold it to Google
6 Hogan warns Britain on US trade deal as EU set to impose tariffs
7 Fast-growing frozen food group has a strong appetite for success
8 Business leaders see better public services as key election issue
9 Barclays to cut 100 senior roles as lender seeks to rein in costs
10 Coveney launches inaugural Italian Irish Chamber of Commerce
Real news has value SUBSCRIBE