Planet Business: Starting the year as we mean to go on 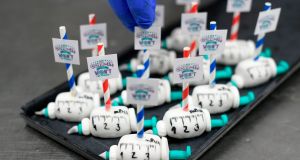 Image of the week: Covid confectionery

Banish all thoughts of new year’s resolutions this January and get stuck into a month of lockdown excess, with or without some specially themed pandemic confectionery. It does exist.

Here, biscuits in the shape of vaccination syringes and the note “bye Covid-19, you won’t be missed” are shown being decorated at Schürener Backparadies bakery in Dortmund, Germany – the bakery also produces some fetching syringe-shaped cakes with the message “2021 Bye-Bye Corona”. Meanwhile, in the wedding industry, bakers have adjusted to producing “Covid cakes”, its name for intricately iced extravaganzas that might have multiple tiers, but are only five or six inches in diameter on account of the distinct lack of wedding guests to share them.

In numbers: Rewind the tape

14,000 Units shifted of the best-selling cassette of 2020, Lady Gaga’s album Chromatica. The retro drinks are on her.

Getting to know: Richard Sharp

An erstwhile Conservative Party donor and former Goldman Sachs banker, multimillionaire Richard Sharp is the new chairman of the BBC, which is nice – for him anyway. Sharp has most recently acted as a Covid-19 adviser to UK chancellor Rishi Sunak, the two having crossed paths at Goldman Sachs, while he was also an adviser to Boris Johnson in his London mayoralty days.

On paper, Sharp’s role at the BBC will be to protect its independence and guide its overall strategic direction. This will involve working with new director-general Tim Davie to negotiate various future funding issues with the British government, the key players in which he luckily already appears to know quite well. His appointment was first reported by Sky News.

The pandemic has forced many companies to completely change focus in order to survive. Here are five pivots that were so successful, they overshadowed the original line of business.

2. Avon. The direct-selling cosmetics empire was founded by a travelling book salesman who concluded his customers were more interested in the free perfume samples that came with the books.

3. Coventry Sewing Machine Company. In the late 1860s, it changed its name to the Coventry Machinists Company, developed an interest in transportation and went on to become the first company in Britain to mass-produce bicycles.

4. Suzuki. Now best known for its motorbikes and other vehicles, the company founded in 1909 as Suzuki Loom Works originally built weaving looms for the Japanese silk industry.

5. Nokia. Probably the most famous example of an industry pivot, Finland’s Nokia began as a humble paper mill before getting into electricity and rubber. It then pivoted its way to its turn-of-the-century status as ubiquitous maker of mobile handsets.