Households and businesses saved €2.5bn more than they withdrew in November alone 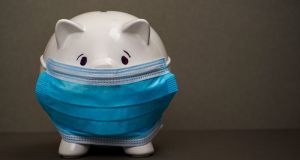 The €13.4 billion annual increase in household savings was the greatest since the Central Bank started compiling data in the current format in 2003. Photograph: iStock

Irish households squirrelled away €13.4 billion of savings in banks and credit unions in the 12 months to the end of November, as they adopted a cautious approach to their finances during the coronavirus pandemic, according to the Central Bank.

It served to push household deposits up more than 12 per cent to a record €124 billion. Companies, excluding financial firms, set aside an additional €12 billion of deposits during the period, pushing the overall figure up 20 per cent to an all-time high of almost €72 billion, the Central Bank said.

“Deposits from Irish households and non-financial corporations continued to record strong growth in November, as the impact of Covid-19 continued to diminish individuals’ opportunity and willingness to spend, and likely induced further precautionary savings,” the bank said.

For the month of November alone, lodgements by households and businesses exceeded withdrawals by €2.5 billion, as the Republic was in the middle of a second period of heightened coronavirus restrictions and families planned Christmas spending.

The €13.4 billion annual increase in household savings was the greatest since the Central Bank started compiling data in the current format in 2003.

“Household incomes have been generally protected through the pandemic by government supports,” said Conall Mac Coille, an economist with Davy. “Through 2020, we’ve seen retail spending rebound sharply when Covid restrictions were relaxed and that trend will continue in 2021, helped by higher savings.”

The Economic and Social Research Institute (ESRI) predicted last month that savings built up during the pandemic will fuel consumer demand and an economic rebound this year as the coronavirus vaccination programme accelerates. However, tightening restrictions in recent weeks amid record cases of infection may force some households to dip into cash reserves.

Net lending to Irish households declined by 0.1 per cent in November to €72 million as a decline in consumer lending offset an increase in mortgage drawdowns. While business lending turned positive in November, it was down by 6.1 per cent on the year.

Meanwhile, a separate Central Bank report showed that total credit and debit card spending rose by 2 per cent to €6.5 billion in the Republic in November from October, despite the State being under Level 5 restrictions for the entirety of the latest reporting period.

Total point of sale spending – driven by ecommerce transactions – increased by 4 per cent on the month, driven by a 6 per cent rise in the retail sector, particularly, in electrical goods and clothing.