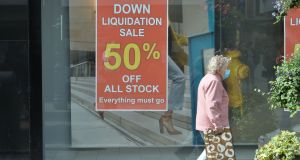 Sectors like hospitality, tourism and retail are suffering sharp economic downturns, but exports of pharmaceuticals and computer services have accelerated. Photograph: Alan Betson

In Ireland, we have two economies. One is uber-rich and driving forward at breakneck speed. The other is lagging behind and caught in a sequence of boom and bust. Two economic reports this week – from the Economic and Social Research Institute (ESRI) and the Central Bank – highlight the growing divergence between the multinational sector here and its domestic counterpart.

The former, led by the world’s leading pharma and tech giants, is seemingly Covid-19-resistant and actually advancing in the face of the worst global downturn in 100 years. The other, the one in which most of us are employed, is limping and injured and facing an uncertain future and perhaps another incoming crisis in the form of Brexit.

The ESRI’s report finds that while Ireland had perhaps the most severe and extended lockdown in Europe, it will suffer only a small setback to headline gross domestic product (GDP).

The Central Bank believes the decline – when all is said and done – will be less than half a per cent. This is likely to be the strongest performance of any advanced economy in the world.

To put this in perspective, Spain’s economy is expected to shrink by more than 10 per cent this year, while Germany, the powerhouse of Europe, which had a much shorter and lighter lockdown than us, expects GDP to fall by 6 per cent, and that’s seen as a very strong result.

The explanation is that while sectors like hospitality, tourism and retail are suffering sharp economic downturns, exports of pharmaceuticals and computer services have accelerated, and these have a greater weighting in our overall GDP number.

Okay, you can cry out about the inadequacies of GDP as a measure of economic activity, particularly domestic activity, but it is still the international yardstick, the one we’re judged on, the one that our creditors look at.

The ESRI’s report shows that the value of construction here fell by more than 40 per ent in the first half of 2020, while arts, entertainment and recreation was down by nearly 75 per cent.

These were the largest declines suffered in any EU country or the UK, reflecting the severity of the Government’s lockdown. At the same time, and in the face of significant global headwinds – broken supply chains and restrictions on travel – industrial output, which includes pharma, rose by 10 per cent in value-add terms.

Exports were what dragged us up from the depths of the last recession, and they seem to be shielding the economy from the worst of the current shock.

The value of both goods and service exports last year was €448 billion, an extraordinarily high figure for a country of just 2.3 million workers. Globalisation and the digital age have created gigantic companies, companies that have balances sheets similar in size to whole countries, most of which have operations here and use Ireland to access global markets.

Globalisation has also polarised economies and polarised workers. Ireland is a microcosm of this. Differentials in wages, housing, and health are accelerating and fuelling political discord.

Despite the benign size of the hit to GDP, the domestic economy, taken in isolation, will undergo a sharp setback from Covid-19. Underlying domestic demand – which fishes out much the multinational excess – is projected to fall significantly in 2020, falling by 7.3 per cent, while unemployment will remain elevated at 15 per cent.

The domestic sector could also be facing into a secondary crisis in the form of Brexit, with the food sector likely to bear the brunt. The Government and Central Bank are both assuming a no-deal outcome to the talks and that’s expected to subtract about 2 percentage points from GDP in 2021.

Either way, the difference between the fast and slow lane of the economy is increasing.

There was no vaccine for Anglo: Why the last crisis was different

1 Direct sea routes to Europe offer certainty in choppy Brexit waters
2 Ten of the most mysterious aircraft disappearances
3 Admission of mistake in Oxford vaccine dose raises doubts over reliability
4 Anti-alcohol zeal of public health experts peppers reopening debate
5 There was no vaccine for Anglo: Why the last crisis was different
6 Promontoria barred from pursuing doctor over Ulster Bank loan
7 Pandemic brings a halt to Zara-owner’s Irish expansion
8 A tale of two pandemics for Smurfit Kappa and Greencore
9 Smarter ways to heat your home: Eight of the best modern systems
10 McCloskey International bought by Metso for €279m
Real news has value SUBSCRIBE