Claim that ECB bounced us into bailout does not stack up 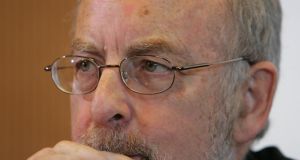 The basic shape of the bailout was already in place by the time Patrick Honohan intervened on “Morning Ireland”. Photograph: Frank Miller

Late one night in Brussels as the Irish bailout deal was being done four years ago, Brian Lenihan was asked about the surrender of Ireland’s economic sovereignty to external bodies. “Every time you borrow you lose some of your sovereignty,” he said.

It was as true then as it is now. Ireland’s capitulation to forces beyond its control was abject in the extreme, the government’s weakness magnified by the ever-increasing reliance of State-guaranteed banks on last-resort loans from the European Central Bank. The long-awaited disclosure of correspondence between Lenihan and Jean-Claude Trichet reveals a little something of what went on but not everything. The question naturally arises as to whether Lenihan’s charge that it was the ECB which finally bounced Ireland into the bailout stacks up. It does not.

Although Trichet’s threat to cut off emergency support for the Irish banks was reprehensible, it was hardly the final straw. It was already clear that there would be a rescue programme. For all the denials from Brian Cowen and his loyalists that anything of the sort was under way, it is well-established now that a party of high- ranking Irish officials left Baldonnel for secret talks in Brussels on the Sunday before Trichet wrote to Lenihan. The delegation travelled on the government jet and spent two days holed up in an office block with European counterparts. It is not the case that officials commandeered the plane without authority. Neither did they unilaterally enter an international negotiation without governmental imprimatur.

At political talks in Brussels on the Tuesday of that week, Lenihan himself came under pressure from a majority of euro zone ministers to leave the meeting and declare immediately that Ireland was seeking a bailout. German minister Wolfgang Schäuble led the charge and was backed up by Christine Lagarde, then finance minister of France. While it appears that only the Austrian minister backed Lenihan at that time, the situation hardly has the makings of a full-frontal assault by the ECB without aid or assistance from elsewhere. Trichet certainly raised warnings at this meeting, but he was not the only one. One week had passed since a G20 meeting at which Timothy Geithner had joined in the clamour to settle the Irish question quickly.

While numerous flaws can be found with the deal done, this tale does not really smack of a bedraggled nation state betrayed by duplicitous supposed friends. True, there was little to cheer in the eventual rescue. In a fraught global emergency, however, the ever-worsening travails of the nationalised Anglo Irish Bank were seen as the biggest problem in world banking at that time. A new solution was called for, and there was no way of dressing it up as an attractive option.

The basic shape of the bailout was already in place by the time Patrick Honohan intervened on Morning Ireland on the Thursday of that week. Ajai Chopra of the IMF arrived in Dublin that very day – and not for a holiday. Only on the Friday – November 17th – did the infamous Trichet missive go to Dublin. The irony is that this letter, which was copied to Cowen, came but one day after a further release of emergency ECB liquidity to Irish banks. In spite of Trichet’s domineering tone and his direction to the government to submit to external aid, the ECB was still funnelling billions of euro to Dublin.

The text itself seems to reflect acute frustration in Frankfurt that the government would not face up to the gravity of its dilemma and submit a formal application for aid. The Fianna Fáil-Green coalition, soon to implode, appeared to be in a fevered state of denial. They may well have wanted to maximise their feeble hand by holding out to the end. Yet that was seen as irresponsible folly in Frankfurt and elsewhere. In Dublin, indeed, and far beyond, there had been anxiety for months that Ireland had veered too far into the danger zone. The worry was that failure to deal adequately with the Irish situation would contaminate another one of the weaklings in the euro zone.

This brings us to the infamous threat, which held out the implicit prospect that Ireland’s ATM machines would be left bereft of cash if there was no bailout application forthwith. It was nasty stuff, but it seems like an empty threat more than anything. Removing ECB support from the banks would have compromised any hope of stability for Ireland and the euro zone at all. At the end of the day, such thinking guided the refusal to torch senior bank bondholders in both 2010 and 2011.