Chris Johns: maybe Europe can get through this Brexit mess 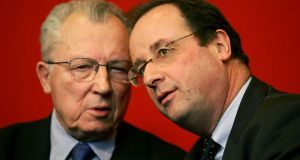 In the run-up to the budget every year we always observe two constants of economic life. Calls for fundamental structural reform of something or other are made with the best of intentions, have impeccable logic, make abundant sense and have no chance whatsoever of ever being implemented.

I have written too many columns suggesting structural reforms.

In addition, we always see at least one jaw-dropping, dopey suggestion from someone – or some organisation – that confirms our deeply held suspicions about politicians and their connection with reality: this year Mary Mitchell O’Connor’s “emigrant tax” won the Daftest Budget Idea of the Year award.

Yet again this year we heard calls for tax reform. Dr Donal de Buitléir of Publicpolicy.ie wrote just such a piece for The Irish Times. Everything he said was absolutely correct: the existing tax code resembles nothing a sentient human being, let alone a tax expert, would design from scratch.

It is far too complex, achieves little by way of efficiency (let alone fairness) and is riddled with anomalies.

Suggestions that it should be reformed cannot be argued with; instead, year after year, those arguments are simply ignored. This year was no different. A new help-to-buy scheme was introduced in response to political pressure - common sense would suggest it will just increase prices.

The budget is just an annual exercise that adds to quirks and holes in the tax code. The only factors that seems to determine what goes in the budget are the ability to shout loudest and an extra few hundred million for health spending. This is the Irish version of fiscal populism.

The brutal truth is that most examples of radical structural change emerge only out of a crisis of one kind or another: it is in that sense that our own recent financial difficulties represented a missed opportunity for reform. If we couldn’t do it then, we will probably never do it.

Yet occasionally someone comes up with a carefully articulated strategy which then gets implemented, notwithstanding obstacles such as vested interests and myriad experts who say it can’t be done. The euro is the clearest example of radical economic change, implemented in the teeth of opposition from just about everywhere.

Of course, many analysts argue that they were right when they suggested that the euro would be a mistake. So it was fascinating to read a study sponsored by the original designer of the euro which recognises all of this.

Delors says that he knew all along that the way the euro was put together meant that the monetary union would be strong but the economic union would be weak. He acknowledges that the reason for this is that only those proposals in his original 1989 report that were politically feasible actually got implemented. The rest, the politically difficult, were quietly ditched, leading directly to the problems the euro faces today.

So a new set of proposals are on the table, all rooted in a hard-headed view of what is politically possible. That’s not to say that the recommendations will be easy to implement but at least they stand a chance. Such an approach is as refreshing as it is virtually unique.

Europe needs more growth: “Delors 2” proposes ways in which public and private investment can be boosted. It is beginning to look like the age of austerity is coming to an end. In a way this is the only logical response to populism: sort out the fundamental problem, low economic growth. Only then, once growth is restored, does “structural reform”’ stand a political chance.

Will any of this happen?

For once there is reason to be hopeful: change has to come because the current situation is clearly unsustainable.

And for once sensible people are coming up with pragmatic, well thought-out policies.

If such thinking prevails, there is a decent chance that Europe can begin to move on from both Brexit and, finally, the financial crisis.