Chinese manufacturing sector slows the most in two years

Global figures point to muted activity in sector in July, with pressure on new orders 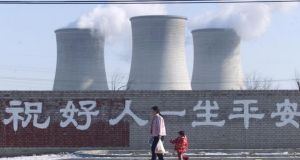 Manufacturing was down again in China in July, the fifth month in a row of contraction in the sector. Photograph: Natalie Behring/Reuters

China’s factory activity shrank more than initially estimated in July, contracting by the most in two years as new orders fell, dashing hopes that the world’s second-largest economy may be steadying, a private survey showed on Monday.

The report followed a downbeat official survey on Saturday which showed growth at manufacturing firms unexpectedly stalled, reinforcing views that the cooling economy needs more stimulus even as it faces fresh risks from a stock market slump.

The final, private Caixin/Markit China Manufacturing Purchasing Managers’ Index (PMI) dropped to 47.8 in July, the lowest since July 2013, from 49.4 in June. That was worse than a preliminary “flash” reading of 48.2 and marked the fifth straight month of contraction, as indicated by a reading below 50.

The official factory Purchasing Managers’ Index (PMI) at the weekend was also weaker than expected, falling to 50 in July, from June’s sluggish growth reading of 50.2. The official survey focuses more on larger companies.

In both China and the US, the employment index declined, indicating that companies under pressure were cutting jobs during the month.

In Britain, growth in the sector picked up in July but new orders grew at the slowest pace in nearly a year.

The Markit/CIPS Manufacturing Purchasing Managers’ Index (PMI) rose more than forecast in July to 51.9, up from 51.4 in June – its lowest level in over two years – but well below an average of 54.3 recorded since April 2013, when Britain’s economy was starting its recovery.

In Germany, manufacturing activity rose slightly for the eighth straight month in July in a sign that a major sector of Europe’s largest economy began the third quarter in growth mode.

The Markit PMI for manufacturing, which makes up about one fifth of the German economy, stood at 51.8 compared with 51.9 in June.