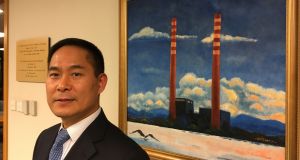 Dr Samuel Qi of the Shanghai Zijin Entrepreneurs Club: “We are keen to invite Irish companies that are planning to tackle the China market to make contact with us to discuss possible co-operation and investment.”

A group of graduates from China’s elite Tsinghua University is launching a 100 million yuan (€13.3 million) private equity investment fund to invest in Irish companies setting up in China.

“We are looking at a wide range of companies. Irish companies have proven their business models in other markets could do very well in China if they establish the right channels and routes to market,” Samuel Qi, a founding member of the Shanghai Zijin Entrepreneurs Club (ZJEC), told The Irish Times in an interview.

With Peking University, Tsinghua is one of the top-two third-level institutions in China. There are currently about 180,000 Tsinghua alumni globally, with some 80 per cent of them in China, and among their number is President Xi Jinping and his predecessor Hu Jintao.

“We hope to be able to provide the finance and the connections that will facilitate these companies in their China ventures in the coming years,” said Dr Qi, a doctor of engineering and is now an investment banker.

The fund is due to be launched at the annual Asia Pacific Irish Business Forum (APIBF), which takes place in Shanghai on Friday. Irish businesspeople from all over Asia will attend the event.

“We are keen to invite Irish companies that are planning to tackle the China market to make contact with us to discuss possible co-operation and investment. If there are compatible interests – and where ZJEC can see the potential to use our members and networks to accelerate the business in China – we will offer to invest in the China operations,” said Dr Qi, whose previous experience involves working for China Telecom group and the US firm AT&T.

“All 80 members of our club are graduates of Tsinghua University, and are funders of medium-scale companies,” said Dr Qi.

“We visited Silicon Valley last year, and next year we will visit Israel. This year we went to Ireland in July, a group of 24 investors, with our spouses and children,” he said.

Initially the fund will focus on business with a proven scale, such as companies that have already been successful elsewhere, with more than 100 employees, as the aim is not be an incubator. The second requirement the fund wants is that the companies have their own indigenous technologies.

“We want companies that have their own intrinsic advantages, such as med-tech or healthcare,” said Dr Qi.

The consultant on the project is Michael Garvey, who has worked for Enterprise Ireland and Invest Northern Ireland in the region, and who has close links with entrepreneur Carl Zhang, who has been doing business with Ireland for more than 20 years and has now invested in two medical device companies in Galway and Wexford.

Mr Zhang is also a founding member of ZJEC and has invested in, and helped to establish, a medical devices company in Ireland that has now been approved to export its products to China. He has also been involved in exporting wool.

ZJEC was founded in Shanghai in 2009 and has 50 members and about 30 advisers. All the members are alumni of Tsinghua University, one of China’s top universities, which is based in Beijing. They are involved in a wide spectrum of industries including finance and investment, ICT and internet, consumer products, med-tech and environmental products and services.