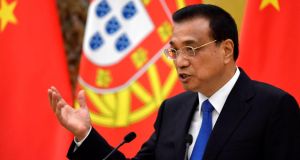 China’s premier, Li Keqiang, said foreign investments would in future need to be registered only, not approved. Photograph: Naohiko Hatta/Reuters

The Chinese government has outlined a raft of new measures aimed at opening up the economy, including loosening the rules on foreign investment to create a fairer competitive environment.

The change in rules for foreign firms is part of broader efforts by Beijing to cut red tape and simplify procedures for new investment projects, the Xinhua news agency reported.

“The meeting stressed measures to improve the country’s business environment,” a statement following the meeting said. “More efforts are needed to create a level playing field for both domestic and foreign companies.”

Premier Li Keqiang said foreign investments would in future need to be registered only, not approved. This would mean more than 95 per cent of procedures for foreign firms would be cut, and the cabinet said the practice had worked in pilot free-trade zones in Shanghai, Guangdong, Tianjin and Fujian.

The new rules do not apply for sensitive industries in which access for foreign companies is restricted. The statement did not go into detail on how the new system would be rolled out.

“It’s an important part of pushing forward a new round of high-level opening up,” the statement said.

Foreign investors often complain of a lack of level playing fields when it comes to setting up in China. While there have been a number of high-profile investments into Europe by Chinese firms, such as the purchase last year of the Irish aircraft leasing company Avolon Holdings in a deal worth €6.5 billion, industry bodies such as the European Union Chamber of Commerce in China complain that western companies are not allowed access to the Chinese market in the same way.

The chamber warned of a protectionist backlash unless China opened its markets faster to foreign investment.

Even though the economy was growing more slowly, China remained attractive for overseas firms as it continued to open up and the business environment improved, the statement ran.

Data from the Ministry of Commerce showed foreign direct investment was up 4.5 per cent in the first eight months of this year, and 18,538 new foreign-funded enterprises were set up in China by the end of August, up 10.2 per cent on a year earlier.

The state-owned China Railway Corporation would make decisions regarding railways, bridges and tunnels, and more private investment would be encouraged in medical care, education, culture and sports.

There would also be a ban on new projects in industries suffering from overcapacity – another bugbear for overseas investors – such as steel, coal and electrolytic aluminium sectors.