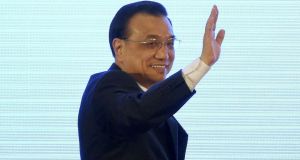 China’s vice premier Li Keqiang: his assessment of China’s economic situation, what is known as the “new normal” with a GDP target formally set at about 7 per cent, has sparked jitters among overseas firms. Photograph: Wang Zhaowang Zhao/AFP/Getty Images

Premier Li Keqiang’s assessment of China’s economic situation, what is known as the “new normal” with a GDP target formally set at about 7 per cent, has sparked jitters among overseas firms, including Irish companies, looking at the world’s second biggest economy.

According to PwC’s 18th Annual Global CEO Survey, 36 per cent of China chief executives are “very confident” of their company’s growth prospects over the next 12 months, a robust figure, although one that is down 11 percentage points from 2014.

The China summary of PwC’s Dealing with Disruption – Thriving in China’s ‘new normal’, shows that almost 71 per cent of China chief executives say there are more growth opportunities for their company now than there were three years ago, while 57 per cent are planning to increase headcount in the next 12 months.

Andrew O’Callaghan, leader of PwC Ireland China Practice, believes Chinese chief executives see the benefit of partnering with other businesses to leverage areas such as knowledge, markets, technology and talent.

“By partnering with Chinese companies, Ireland has a great opportunity to further its potential in China and grow its export market in areas such as food, tech, pharma and financial services,” he says.

“Likewise, as a tech hub with highly skilled people in a country which has a competitive and transparent tax regime, Ireland is perfectly positioned for Chinese companies contemplating doing business in Europe. ”

The challenge for China’s chief executives is finding growth at the same time as dealing with rebalancing and major transformation.

“They are also right to recognise the risks of the ‘new normal’ and to plan and act accordingly by focusing on driving business growth through building diversified partnerships and continuing to invest in digital technology and talent,” O’Callaghan adds.

The threats include a lack of skills availability –95 per cent of respondents said this was an issue – while 85 per cent said they were concerned about the access to affordable capital. Other major threats include new market entrants (90 per cent), speed of technological change (88 per cent), increasing tax burden (88 per cent) and a shift in consumer behaviour (88 per cent). “Their level of concern is higher than it was last year and generally higher than that of their global peers,” the report says.

One notable area of opportunity for Irish companies is in joint ventures or partnerships with Chinese companies.

Six out of 10 chief executives in China are looking to undertake a joint venture or alliance in the next 12 months, an 18 percentage point increase compared to the previous survey.

Almost eight in 10 say rising competition and shifts in customer behaviour are the most disruptive trends for their industry over the next five years. Others include changes in distribution channels (66 per cent), changes in industry regulation (63 per cent) and changes in core technologies of production or service provision (37 per cent).

Many recognise the significance of digital technology on their businesses, but others are less clear about how to drive value from them.

Only two-thirds (67 per cent) say they have a clear vision of how technologies can help achieve competitive advantage. This is a relatively lower percentage compared to that of the global average (86 per cent) and the US (92 per cent). China’s chief executives need to make it a priority to get a better understanding of precisely how they can leverage digital technologies in their businesses, the PwC report says.