Cantillon: Irish in UK sign up for anti-Brexit vote 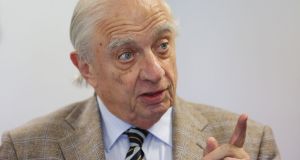 Irish businesspeople are understandably wary about being seen to interfere in the UK’s forthcoming vote on EU membership. The Irish4Europe business lobby group, however, has in recent weeks gently tried to persuade Irish citizens living in the UK to vote “remain”.

A letter, signed by many senior figures from Irish4Europe, appeared in the Observer newspaper on Sunday urging eligible voters to reject a Brexit.

Its arguments were a laundry list of the standard Irish concerns about the impact a “leave” vote would have on this country: economic links, the peace process, the impact on the Border and the common travel area.

The letter was signed by a broad cross-section of high-profile Irish businesspeople operating in the UK. Top of the list were Ronan Dunne, chief executive of mobile phone company Telefónica UK, and Peter Sutherland, former chairman of Goldman Sachs International and one-time European commissioner.

Celebrity chef Richard Corrigan, who runs restaurants in Mayfair and in Harrod’s, also put his name to the missive, along with Paul Costelloe, the fashion designer.

Pat Butler, non-executive director of Bank of Ireland, Pól Ó Móráin of the Government’s Export Trade Council, and Elgin Loane, publisher of the Irish Post newspaper in the UK, were also prominent signatories.

While studiously avoiding a lecture to UK citizens on how they should vote, the letter said: “The Irish live, work, run businesses and pay taxes in Britain. The Irish in the UK have the right and privilege to vote in the referendum and we encourage them to do so . . .

“ . . . Our common membership of the EU has helped the UK and Ireland to become friends and stay friends. We strongly believe that this is something worth voting for and encourage Irish citizens in the UK to vote for the UK to remain in Europe . . . ”

1 Moving in and out of lockdown is a recipe for economic disaster
2 Eir customers lose sports content over contractual row with Virgin Media
3 US treasury forced to pay up to fund record stimulus
4 KBC Ireland chief feels heat from big tech in race for relevance
5 General Motors loses rising star after shock move to Stripe
6 Aryzta’s move to replace chairman prompts takeover speculation
7 Divorce: What will it cost and can you afford it?
8 Eight places that will pay you to move there
9 Government to publish broadband contract 10 months after controversial deal
10 Schrems II: there's no way to transfer data to US and comply with EU law
Real news has value SUBSCRIBE