Uncritical clamour for the dismantling of Irish Water continues 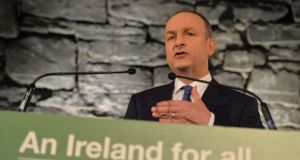 Micheál Martin at the launch of the FIanna Fáil manifesto. Election campaigns are one thing but government is an altogether more serious matter.

Election campaigns are one thing but government is an altogether more serious matter. Not that you would realise it from the somewhat delusional consensus building on the issue of water charges.

Despite a few dissident voices in recent days, there is a broad acceptance in political circles that water charges must be dropped for any government to win sufficient support to operate – even as a minority. The uncritical clamour for the entire dismantling of Irish Water continues.

Water charges, and the utility generally, has become a lightning rod for broader anger at what – in hindsight – appears to be arrogance in Government circles over its insistence that the recovery was real at a time when all too few voters felt its warmth. But the worst transgression of the outgoing administration is the cavalier way it established Irish Water after the troika left while presenting it as something over which they had no choice and for which they would make no case.

How then can they be surprised at the reaction?

So now we want to dismantle Irish water despite all the investment to date and just as it finally puts together – for the first time in generations – a reasonably accurate picture of the state of our water infrastructure and the investment necessary to make it fit for purpose.

And this at a time when the European Commission last week decried the “major infrastructural weaknesses” in our water system.

“The constraints or negative effects that poor water supply and wastewater treatment facilities impose on growth, competitiveness, housing development and the environment are fully apparent already,” it said.

Turning back the clock means responsibility for necessary water investment reverting to councils which have always found more urgent immediate needs for any funding available, or central government.

In either case, it will impact on Ireland’s room for manoeuvre with its the budget and fiscal rules – ie there’ll be less money available for the very things anti-water campaigners are looking for.