Cantillon: bulls are back ahead of budget day 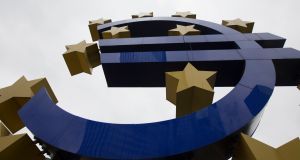 “Tax cuts and lower oil prices have increased consumer spending, and the weak euro has helped competitiveness, with exports benefitting”

The fourth quarter of the year looms and, with it, a new batch of economic forecasts. Ahead of the budget this day fortnight, a cascade of data is on the way.

The bulls are back. Out of the traps today comes Davy, which has its sights on a 6.5 per cent expansion in GDP for 2015 and 4 per cent for 2016. This would have seemed like rather tasty stuff a few months ago, but the growth acceleration in the first half of 2015 changed the scene. Davy’s previous forecast pointed to 3.7 per cent growth this year and 3.4 per cent growth next year.

In line with others, Davy’s chief economist, Conall Mac Coille (right), sees recovery spreading into the domestic economy after the export-led turnaround.

“Several tailwinds have also accelerated the pace of expansion in 2015,” he says. “Tax cuts and lower oil prices have increased consumer spending, and the weak euro has helped competitiveness, with exports benefitting. Looking forward, the €1.2-€1.5 billion budget giveaway, worth 0.7 per cent of GDP, will sustain above-trend GDP growth.”

Critics of the strategy argue the strong growth rate obviates any need for more stimulus. But Mac Coille says there’s still spare capacity in the tank, in the retail and construction sectors particularly.

“Irish employment is still 9.7 per cent below peak levels,” he says, “and the unemployment rate at 9.5 per cent in July still suggests that the output gap is negative.”

For all that, a €600 million supplementary health estimate to come will take some of the gloss off the deficit this year and next. The glittering prize of a balanced budget is still a little further away.

1 Aldi empire wracked by family feud
2 Will PTSB be Ulster Bank’s knight in shining armour?
3 Volkswagen close to selling its Bugatti supercar brand
4 ‘In Denmark, we pay high taxes and health insurance but we get a lot back’
5 TikTok to be banned from US app stores from Sunday
6 Northern Ireland’s economy is threatened by more than Brexit
7 Kiely’s pub to make way for 7-storey co-living scheme
8 How Ireland managed to green the White House
9 Hard work, drive and energy key to making it in business
10 Roche says its drugs reduce ventilator need for Covid patients
Real news has value SUBSCRIBE