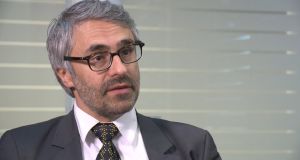 The bulk of profits attributable to Apple’s Irish operations belong in the US, the OECD’s tax chief has said.

Pascal Saint-Amans was responding to a question during a visit to Dublin about the European Commission’s recent tax ruling in relation to Apple, which said the Irish Revenue should bill two of the tech giant’s Irish entities €13 billion in back taxes.

While Mr Saint-Amans declined to comment directly on the commission’s ruling, he said that, as most of the company’s research and development took place in the US, it was clear profits should be associated with that jurisdiction.

“There is no ambiguity here: the bulk of it belongs to the United States, ” he said.

Mr Saint-Amans, director of the OECD’s Center for Tax Policy and Administration, was in Dublin for a meeting with Minster for Finance Michael Noonan to exchange views on the international tax agenda.

He said he was not surprised at the sum involved given Apple’s level of profitability. Mr Saint-Amans was also asked about the commission’s recent invitation to other EU states to consider whether they were entitled to part of its €13 billion finding against Apple.

Mr Saint-Amans said Ireland’s 12.5 per cent corporation tax rate was not under threat from moves to reform the global tax system.

“There is no questioning of the rates taken by some countries,” he said. “Clearly the US is much too high but I cannot say that Ireland is too low. It’s not. It’s accepted. Even the French have understood that Ireland will not change its tax rate. It’s here and it’s perfectly fine,” he said.

Mr Saint-Amans said the implementation of the OECD’s base erosion profit shifting project (Beps) was proceeding, with more than 85 countries now on board.

While the commission’s decision against Apple has put the spotlight back on multinational tax avoidance, it has also raised the risk of significant push-back from the US.

“Are we moving to a tax war between two blocs, Americans and Europeans, or are we still in an environment in which we can still build something? My view is that we must ensure we have co-operation among all the countries,” Mr Saint-Amans said.

“Clearly for the future we need to have a common set of rules,” he said, noting that revised rules on transfer pricing, where profits are shifted to low tax jurisdictions, would better align profits to economic activity.