Minister for Public Expenditure Paschal Donohoe announces increases in spending on health, education and social welfare as part of Budget 2017. 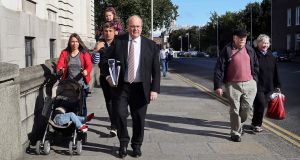 Significantly higher than expected spending increases have been unveiled by Minister for Finance Michael Noonan and Minister for Public Expenditure and Reform Paschal Donohoe.

However, the decision to increase the budget package led to warnings from the chairman of the Irish Fiscal Advisory Council, the independent budget watchdog, that the Government had gone beyond what was prudent and was set to breach key EU rules.

The highlights of the budget were a €5 a week increase in the pension and other welfare payments, a comprehensive childcare package, measures to help first-time house buyers and a modest cut in the universal social charge.

However, the measures will cost the exchequer an extra €1.3 billion – significantly higher than the figures mooted just a month ago. In all, less than a third of available money has gone in tax cuts.

The chairman of the fiscal advisory council, Prof John McHale, expressed concern last night that when the budget package was combined with earlier additional spending commitments the total increase in spending and tax cuts for next year would come to €3 billion over and above 2015.

Last month, he told the Dáil budget oversight committee that the Government’s budget day package, estimated at that stage at €1 billion, was “at the limit of the range of prudent policies”. He said last night that the Government was now set to miss a key borrowing target for this year – the so-called structural balance.

For next year, the Government was on course to miss the expenditure benchmark level – its overall spending limit, he said.

The emphasis on extra spending rather than tax cuts reflects the make-up of the Dáil with the Fine Gael-led minority government dependent on the support of Independent Ministers and the acquiescence of Fianna Fáil to get the measures through.

In contrast with budget speeches down the years, there was almost no heckling from the Opposition during the speeches of both Ministers and very muted applause from the Government benches when they finished. The Government is now bracing itself to resist a raft of public sector pay claims that could derail a budget already heavily geared towards extra spending.

Mr Donohoe warned the Dáil that the extra funding for health, education and childcare had been possible only because of public pay restraint.

He said the budget included a provision of €290 million for pay increases agreed under the Lansdowne Road Agreement but no more than that.

With gardaí, teachers, nurses and other groups lining up to take industrial action in support of claims for payments over and above those in the agreement, the Government’s response will be a test of the budget strategy.

In his budget speech, Mr Noonan said that when he took office in March 2011 the budget deficit for the year was 32 per cent while he was forecasting a deficit of just 0.4 per cent for next year. Unemployment had been almost halved over the period and borrowing costs were a fraction of what they were.