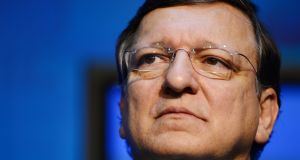 José Manuel Barroso will be the first former European Commission president to have his “red-carpet privileges” stripped on visits to Brussels.

José Manuel Barroso will be the first former European Commission president to have his “red-carpet privileges” stripped on visits to Brussels as scrutiny deepens into his appointment to a top post at Goldman Sachs.

Commission president Jean-Claude Juncker is examining his predecessor’s work contract with Goldman and has told staff to treat Mr Barroso in the same way as any other lobbyist liaising with Brussels.

As former commission chief as well as a former prime minister of Portugal, Mr Barroso would ordinarily receive VIP treatment from European Union leaders and institutions in Brussels, where he held sway for 10 years as Europe grappled with a long financial crisis.

In future contacts, however, he will be regarded as an “interest representative” and any EU commissioner or official will have to register and maintain notes of any dealings with him. This in effect means he will not be received in Brussels as a former commission president.

Mr Barroso’s appointment at the bank has been intensely criticised in France, where President François Hollande labelled it “legally possible but morally unacceptable”.

As a Goldman adviser, Mr Barroso will work with the bank’s clients. The institution has been attacked for arranging complex financial instruments that helped Greece massage its public finances while he led the commission.

Last week Emily O’Reilly, Europe’s ethics watchdog, said the appointment had shaken public trust at a “very challenging time for the EU” and argued it was not enough to say no rules were broken.

In reply to Ms O’Reilly, Mr Juncker said the commission would ask Mr Barroso “to provide clarifications on his new responsibilities and the terms of reference of his contact”.

Mr Juncker plans to seek the advice of the commission’s ethics committee on whether Mr Barroso is complying with his legal duty “to behave with integrity and discretion” when taking appointments or benefits after leaving office.

Mr Juncker said: “Mr Barroso will be received in the commission not as a former president but as an interest representative and will be submitted to the same rules.”

Goldman said: “Goldman Sachs and Mr Barroso have adhered to all applicable legal rules and the highest ethical standards in his appointment.” – (Copyright The Financial Times Limited 2016)