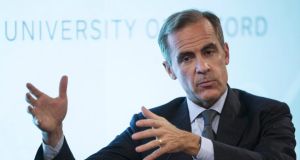 Bank of England governor Mark Carney making a speech at The Sheldonian Theatre in Oxford on Wednesday. He spoke about the benefits and risks of Britain’s EU membership. Photograph: Eddie Keogh-Pool/Getty Images

A prominent campaigner for a British exit from the European Union accused Bank of England governor Mark Carney of venturing into politics after the central bank chief delivered an upbeat assessment of Britain’s EU membership.

Ahead of a referendum on whether to leave the EU that prime minister David Cameron has promised by the end of 2017, Mr Carney’s emphasis on the economic benefits of membership was widely seen as a boost for campaigners to keep Britain in the EU.

Mr Carney said in a speech on Wednesday that membership had made Britain’s economy more open, dynamic and competitive.

“I have known many governors over the years and I can’t think of any previous governor who would weigh in in a political way on an issue such as this,” said Lord Lawson, who served as Margaret Thatcher’s finance minister from 1983 to 1989.

Mr Carney’s views on the benefits and risks of EU membership largely echoed the position of the Conservative government.

Chancellor George Osborne said on Thursday he agreed with the governor and he too stressed the need to safeguard the interests of non-euro zone countries.

In advanced economies where the central bank is independent from the government, officials are expected to remain aloof from politics to ensure their credibility in the eyes of the public and investors.

Despite similarities between Mr Carney’s views and those of the government, it was right for him to speak on an issue that was key to the economy, a former Bank of England policymaker said.

“It would be a major shock if we came out of the EU so I think it is appropriate for the Bank of England to give the voice of economic sense,” Andrew Sentance said.

“The governor should not be a person who hides their views under a bushel. They should be prepared to speak out on big economic issues,” he said, recalling outspoken comments by Carney’s predecessor Mervyn King on the banking sector.

Pro-Europeans warn an exit could hurt Britain’s economy and lead to the break-up of the United Kingdom by triggering another Scottish independence vote. Opponents of membership say Britain would thrive outside the EU.

Mr Carney, the former head of Canada’s central bank who took up his post at the Bank of England in 2013, stressed in the speech that he was not weighing up the pros and cons of Britain’s EU membership, but rather its implications for the Bank of England. – (Reuters)