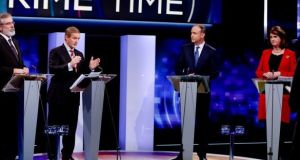 This has been a particularly graceless election, with far too little regard for the scale of the existential challenge the State faced in 2008 and which hobbles it still. That is more to acknowledge reality candidly than to look backwards.

The challenge will remain whenever the blur of rhetorical extravagance and indulgent half-truths subsides. At issue in the polling booth is whether the next government tackles it with adequate policies – and decent values – or makes the whole thing worse with woolly answers to unavoidable questions.

These are the stakes. Contrary to what you might think after three weeks of argument (or is it months?), this is not a braying contest between grown adults in radio studios. Neither is it a competition to determine who is best at righteous finger-wagging on television or the artless recitation by rote of political bullet points.

This is, rather, an exceedingly serious decision about the stewardship of State in which real people and their families live. Young people, old people, sick people, children, immigrants, working people, people who want to want to work, homeless people. Not resident here, of course, are many thousands of emigrants who had to leave Ireland because their State’s capacity to provide a livelihood for its people was drastically compromised after the crash.

After a collective near-death experience – one which still mars the lives of many – the vote centres on who leads into the next phase. Like all big decisions, this calls for a very careful assessment of the facts. That, however, is quite the opposite of what we get in much of our debate.

Some people would have have you believe that Irish society and many essential services within it are on the very verge of collapse. Others argue that some kind of Garden of Eden economy is within our grasp. Others still would tell you these two things at the same time: that everything in the land is truly ghastly and that a state of perfection can be attained with a simple fiscal hop, the merest policy skip and a little political jump. We all know that’s simply not true, but that is what the rhetoric suggests.

Serious strides forward have been made since the worst of the debacle but huge failings remain, fanned by a gaping lack of money after mutually exacerbating crises in the public finances and banks. That’s exactly what happened. Painful corrective action restored order in the public finances and the banking system, thereby protecting savers’ money. It doesn’t exactly stir the taxpayer’s heart, but that’s not the point.

The effort was undertaken at great public cost, and a lingering sense of injustice still surrounds the bank rescue. Still, to cast the whole endeavour as some kind of a conspiracy to bleed dry the people is deeply fallacious.

There is a deeper point. Populist, binary argument serves no one but we’ve had plenty of that in the last few years. Choose an enemy and lash out accordingly – noisily and repeatedly.

To observe the spectacle of the US Republican presidential nomination is to see the nasty upshot of unchecked coarse politicking. Thus, we get Donald Trump’s malignant ban on Muslims, or the hare-brained notion of a wall financed by Mexico to keep Mexicans away from Texas. Then we get the scheming demagoguery of Ted Cruz, who would hunt down “Tommy O’Malley” if his visa is out, take him from his family in Long Island and send him straight back to Cork like soiled goods. What charming men.

There is more than a little narrow-gauge thinking, too, in Britain’s EU referendum debate. For Britain and indeed for neighbours such as Ireland, the question could hardly be more serious. Yet the whole damned thing is presented as a bit of an in joke by Boris Johnson and Nigel Farage, as if the greatest ill besetting British life was Europe.

No matter how the election goes on Friday, a government will have to be formed. And no matter what was said during the campaign, all of its decisions will still be framed within the tight fiscal contours that follow on from the crash. Compromise will be required, yet that’s hardly new. Politics without compromise is mere ideology. It’s certainly not government.