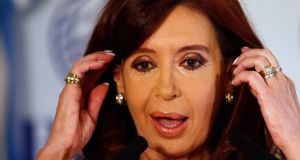 Argentina tipped into its second default in 12 years in July after US District Judge Thomas Griesa blocked payments to holders of debt issued under US law that was restructured following its record default in 2002.

Judge Griesa said measures announced by Argentina’s president this week to make debt payments locally and push bondholders to bring their debt under Argentine law violated past court rulings, though he stopped short of holding the country in contempt.

Analysts say that a deal between Argentina and the US investment funds who rejected large writedowns in the wake of the 2002 default is now unlikely before next year’s election, in which president Cristina Fernandez cannot run.

The country’s peso currency has shed 1.3 per cent since the tough-talking Fernandez unveiled the draft bill late on Tuesday, its fastest fall since January, plumbing a new record low of 14 per dollar on the black market on Thursday.