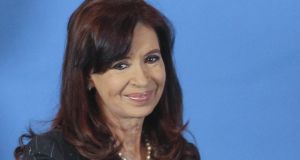 Argentinian president Cristina Fernandez de Kirchner yesterday set senior officials the task of averting a debt crisis a day after she ruled out complying with a US court order to repay holders of defaulted bonds in full.

Economy minister Axel Kicillof was last night due to unveil details of a plan to keep servicing restructured bonds while disobeying court orders that would block those payments unless creditors holding out for full repayment are paid as well.

Hours after the US Supreme Court declined to hear Argentina’s appeal, Ms Fernandez used the term “extortion” to describe the ruling while vowing to keep paying restructured debt including an interest payment of $900 million (€664 million) due on June 30th.

The ratings agency said a default or distressed debt exchange appeared to be “inevitable” within six months.

Ms Fernandez said complying with the ruling was impossible and would expose Argentina to as much as $15 billion in claims from creditors who rejected restructuring offers following the country’s $95 billion default in 2001. The president said she instructed Mr Kicillof, who negotiated to resolve debt disputes, to figure out a way to keep paying holders of restructured notes.

Ms Fernandez said in August that she would offer to swap holders of restructured New York-law bonds into debt governed by local law to avoid having to pay holdout creditors in full. Government attorneys later denied having a plan to do so.

According to a May 2nd memo leaked to an Argentinian website last month, the country’s attorneys recommended a default and immediate restructuring in the event the Supreme Court rejected the appeal, which was tied to claims totaling $1.3 billion. – (Bloomberg)