Argentina locked in a high-stakes stand-off with bondholders 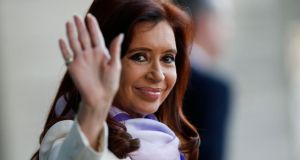 Just 12 years after declaring history’s largest debt default, serial offender Argentina finds itself at risk of a repeat with potentially disastrous results for its fragile economy.

The government in Buenos Aires is locked in a high-stakes stand-off with holders of bonds it defaulted on in 2001. If no resolution is reached by next Wednesday, a new default looks inevitable. At the time of writing, talks were ongoing to find an 11th-hour solution.

Argentina’s latest debt crisis is a hangover from the last one and is rooted in the country’s flawed efforts to renegotiate with bondholders after the 2001 default.

In 2005 Argentina imposed a swingeing cut on investors when swapping defaulted for restructured bonds. Many bondholders refused to accept the terms, which implied a 65 per cent loss on investment, and have turned to the courts in the US, where the paper was originally issued.

There the bondholders have won a ruling from New York district court judge Thomas Griesa, which prevents Argentina from making interest payments on the restructured bonds unless its pays the so-called holdouts in full.

Argentina says it will not do so, arguing that the 2005 restructuring deal, which it reopened in 2010, was eventually accepted by more than 90 per cent of bondholders and it will not bow to what it labels vulture funds who bought up the defaulted debt at pennies on the dollar and are looking to make a large profit.

But as the original bonds contained no collective action clause, the holdouts, led by hedge fund billionaire Paul Singer, say they are not obliged to abide by the decision of the majority who accepted the restructuring deal, and are determined to push for better terms.

Analysts say this would amount to a technical default, although the government disputes this. “Argentina will not enter default for a simple and elemental reason: default is for those who don’t pay and Argentina is paying,” said Argentinian president Cristina Kirchner.

A technical default will further delay efforts to return to international capital markets, closed to Argentina since the 2001 default, at a time when the government is desperate for funds to cover a fiscal deficit that is undermining confidence in the local peso. A new default could also see commercial credit lines to Argentine companies shut off, which could deepen the current recession and further weaken the peso.

Argentina’s previous intransigence means it has little sympathy even among those with whom it agreed the debt restructuring deal. “I can feel sympathy for the Argentine people but not the administration,” says Hans Humes, co-chairman of the Global Committee of Argentina Bondholders, which represented investors in the restructuring talks.

“The sense that the majority of bondholders settled in 2005 is misleading. There was never a negotiation. It was really beaten into us that if we did not take this offer we would get nothing. The holdouts could never have gone as far as they did if the Argentines engaged properly at any stage. Given the Argentine behaviour, I think that having people who have the firepower and willingness to engage them in court is a good thing.”

Argentina has garnered some support from those who worry that the US court’s ruling will strengthen the hand of holdouts and make future debt restructurings far more difficult for bankrupt countries trying to get back on an even keel.

Analysts say Argentina’s evident refusal to negotiate means the wider impact will be limited, especially as collective action clauses are now more widely used in bond contracts. “In the end this is about Argentina. I don’t think this will lead to this end-of-the-world scenario for future renegotiations that Argentina is trying to push,” says Prof Laura Alfaro of Harvard Business School.

The 2005 restructuring deal included a “rights upon future offers” (Rufo) clause, obliging the government to extend any improved deal for holdouts to those who settled.

The government has said it could face claims for $15 billion (€11.2 billion) from bondholders who entered the restructuring deal if it makes an improved offer to the holdouts. That is about half the country’s foreign reserves, one of the last props holding up the tottering peso.

“There is a real worry among officials over Rufo,” says Diego Chameides, an analyst at Quantum Finanzas in Buenos Aires.

“If Rufo is activated, Argentina would enter into default anyway because the country could not afford to pay. So essentially both paths lead to default with the bigger one being Rufo.”

A stay ruling may be sought, delaying Wednesday’s payment until the end of the year when the Rufo clause expires.

But after almost 13 years of often poisonous dealings between Argentina and the holdouts, it remains unclear if there is the goodwill or patience for such a truce.