Argentina defaults on debt for second time after talks fail 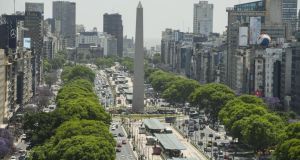 An obelisk stands in downtown Buenos Aires, Argentina. Argentina will default on its debt within hours after talks with holdout creditors broke down last night. Photo: Bloomberg

Argentina defaulted for the second time in 12 years after hopes for a midnight deal with holdout creditors were dashed, setting up stock and bond prices for declines and raising chances a recession could worsen this year.

After a long legal battle with hedge funds that rejected Argentina’s debt restructuring following its 2002 default, Latin America’s third-biggest economy failed to strike a deal in time to meet a midnight deadline for a coupon payment on exchange bonds. Even a short default will raise companies’ borrowing costs, pile more pressure on the peso, drain dwindling foreign reserves and fuel one of the world’s highest inflation rates.

“It is going to complicate life for businesses like YPF which were going to look externally for financing,” said Camilo Tiscornia, a former governor of Argentina’s central bank.

Argentina saw its credit rating cut to ‘selective default’ by Standard & Poor’s as talks between government negotiators and US creditors to avoid a new debt crisis broke up last night without agreement.

The ratings agency considered Argentina to be in default after it failed to make a US$539 million interest payment due yesterday to holders of a bond maturing in December 2033. The development risks exposing the country to billions of euros in legal claims and deepening a recession.

The downgrade came as talks between the two sides were still underway but the meeting ended shortly afterwards without a deal to limit the impact of S&P’s move and allow a final settlement between Argentina and the last holders of bonds it defaulted on in 2001.

These holdouts had refused to participate in a 2005 restructuring of the country’s debt and won a ruling in the US that prevents Buenos Aires servicing bonds issued as part of that deal unless they received $1.5 billion (€1.12 billion) in full payment for their paper as well.

Argentina had deposited the money to service the restructured debt at a New York bank but a US judge had forbidden distribution of the cash unless it also paid up the holdouts.

Judge Thomas Griesa ruled Argentina could not service its exchange debt unless it paid holdouts at the same time.

A proposal for Argentina banks to buy out the hedge funds’ non-performing debt also fell through.

“This is a very particular default, there is no solvency problem, so everything depends on how quickly it is solved,” said analyst Mauro Roca of Goldman Sachs. As dire as it is, the situation is a far cry from the mayhem following the country’s economic crash in 2001-2001 when the economy collapsed around a bankrupt government. Millions of Argentines lost their jobs. This time the government is solvent.

How much pain the default inflicts on Argentina, which is already in recession, will depend on how swiftly the government can extricate itself from its obligations.

1 Bank leaked my loan request to family who tried to rip me off
2 Flight attendent seeks High Court injunction against Aer Lingus
3 Wealthy investors’ legal challenge against Revenue fails
4 Coronavirus: Irish holding back on holiday plans
5 C&C abandons US agreement with Pabst for cider portfolio
6 Coronavirus: ‘All bets are off’, says aircraft industry chief
7 Tax burden on Irish households among lowest in EU
8 How to . . . move (almost) everything to your new phone
9 Beau Lotto: How to rewire our brains to spark innovation
10 Solar panels: Are they worth the investment?
Real news has value SUBSCRIBE