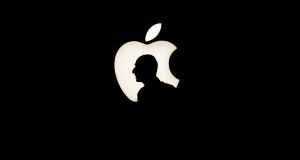 A man at an Apple event in San Francisco: observers believe there is scope for Apple to settle the tax case for less than €1 billion. Photograph: Beck Diefenbach/Reuters

Apple and the Obama administration have aligned against the European Commission’s tax inquiry into the firm’s Irish affairs.

While there is speculation in business circles that Apple may be preparing to seek a settlement of the case with the Brussels authorities, the company is understood to be strongly resisting any direction to pay back-taxes to Ireland.

With a ruling in the case expected after the general election, Apple chief executive Tim Cook is understood to be advancing the same arguments against the commission as the US treasury.

Robert Stack, a top treasury official, argued forcefully before a Senate committee last month that the investigation could undermine US rights under tax treaties with EU member states.

The Apple case is the largest in a series of inquiries into the affairs in other countries of US groups Amazon, Starbucks and McDonald’s, and Fiat of Italy.

Mr Cook had a surprise “private” meeting on Thursday with European competition commissioner Margrethe Vestager, after which he tweeted that Apple had created more than 1.4 million jobs in Europe.

Observers believe there is scope for Apple to settle the case for less than €1 billion, big enough for Brussels to claim a victory but not big enough to damage Apple financially.

Apple has a more than €190 billion in its cash pile.

JPMorgan, its investment banker, has said the firm could be on the hook for $19 billion.

It is understood, however, that Mr Cook remains personally convinced of the firms’s case.

Apple – and indeed the Irish Government – have long argued that it received no selective advantage in Irish tax rulings and has paid all tax lawfully due to the Revenue.

Moreover, Apple has argued that it has set aside money due to the US tax authorities whenever it repatriates profits to US. The tax liability in such cases is deferred until the profit returns to the US operation.

As US opposition to the inquiry intensifies, ranking Washington officials have been making the same arguments.

In testimony to the powerful Senate finance committee, Mr Stack said “the retroactive application of a novel interpretation of EU law calls into question the basic fairness of the proceedings”.

He also said any settlements could give rise to creditable foreign taxes under US law. This could leave American taxpayers to foot a bill when profit was repatriated, unless the US tax was paid on the higher creditable tax.

“We are greatly concerned that the EU Commission is reaching out to tax income that no member state had the right to tax in under internationally accepted standards,” Mr Stack said.

1 How well paid do you think you are? Here’s how to work it out
2 Life as a Facebook moderator: ‘People are awful. This is what my job has taught me’
3 AIB to sell more than 500 ATMs to Brink’s
4 Coronavirus and the etiquette of working from home
5 Facebook forced by DPC to suspend use of election day voting tool across EU
6 Dublin workers earn on average 15% more than rest of State
7 Flight attendent seeks High Court injunction against Aer Lingus
8 Wealthy investors’ legal challenge against Revenue fails
9 Citi names Limerick native Cecilia Ronan European unit chief
10 Coronavirus: Irish holding back on holiday plans
Real news has value SUBSCRIBE