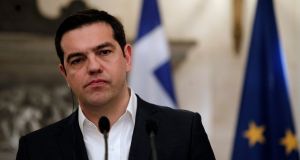 The government of Alexis Tsipras has pushed through dozens of reforms, but many outstanding issues remain. Photograph: EPA

Greek prime minister Alexis Tsipras made a fresh call for debt relief ahead of Friday’s meeting of euro zone finance ministers, as new data showed that the country posted a larger primary surplus than expected in 2015.

As the Eurostat figures showed that Greece attained a primary surplus of 0.7 per cent last year, well ahead of a target of 0.25 per cent, the Greek leader said that the country did not need new austerity measures.

“Greece, which has a primary surplus of 0.7 per cent does not need extra measures. What Greece needs is an essential debt relief,” Mr Tsipras told Euronews. “We must move forward and finally overcome the crisis.”

Euro zone finance ministers gather in Amsterdam on Friday for a eurogroup meeting that is expected to be dominated by Greece, as negotiators push to complete the first review mission of the third Greek bailout following months of delays.

But while progress between Greek negotiators and creditors was made during ongoing talks in Athens on Thursday, according to officials, the completion of the first review mission - initially scheduled to take place last October - remained elusive. An extraordinary euro group meeting could take place next week if sufficient progress is made on the bailout discussions, including changes to income tax exemptions demanded by the Troika.

With euro zone finance ministers due to take stock on Greece at Friday’s meeting, divisions remain among Greece’s lenders on the country’s need for debt relief.

Noting that some parliaments would have to approve debt reduction measures for Greece, a senior euro zone official said there were “huge differences in attitude towards debt-related measures - between institutions and member states. The range is quite significant,” he said, ahead of the meeting.

Tensions between the IMF and Greece’s EU lenders over the best way forward for Greece have failed to be resolved since the country’s third international bailout was agreed last summer following months of acrimonious negotiations.

The IMF has made its participation in the third Greek bailout contingent on some form of debt relief for Greece, but a number of euro zone lenders are unenthusiastic.

While European lenders have stressed that the range of reforms prescribed under the bailout programme must first be implemented before any consideration of debt relief can take place, the IMF believes debt relief is an essential prerequisite, regardless of the reforms made.

“The combination of reforms plus debt relief must give us and the international community reasonable assurances that by the end of Greece’s next program, after almost a decade of dependence on European and IMF assistance, Greece will finally be able to stand on its own,” the IMF’s Paul Thomsen, the fund’s senior official overseeing Greece, wrote in February.

Also at issue is conflict about debt-sustainability calculations that are used to calculate Greece’s ability to repay its debt in the medium to long term.

According to a senior euro zone official, “firming up a joint appreciation of what the growth and fiscal situation of the Greek sovereign will be over the medium and long term” is expected to form part of the discussion at Friday’s meeting.

The government of Mr Tsipras has been pushing through dozens of reform measures demanded under the terms of Greece’s €86 billion bailout programme, but outstanding issues remain, including pension reforms and the status of non-performing loans in the banking sector.

While Greece’s first bailout review under its third bailout programme was due to be completed in October, lenders have failed to sign off on the review which would allow for the next disbursement of funds under the bailout programme.