Dublin to become one of the most densely sensored cities 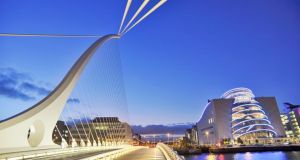 Samuel Beckett Bridge: Dublin City Council is working with IBM on a project analysing transport within the city

It’s difficult to find a hard and fast definition of what exactly a “smart city” is. For simplicity’s sake, smart cities could be described as urban areas that use mobile communication technology to deliver better services to citizens and local authorities.

Take Barcelona, where sensors alert workers when rubbish bins need to be emptied, or Southampton where “Smartcities” cards allow users to access various services from public transport to libraries and gyms.

But it’s a bit more complicated than that and, unfortunately, much of the online literature is dense with clunky terms, such as “integrated systems” and “lateral connectivity”, which tend to obscure rather than aid understanding.

Volker Busher, a director at consultancy and engineering firm Arup, was in Dublin last Thursday to give an address on smart cities at the Property Industry Ireland conference. He agrees the term is open to broad interpretation. “We use two narratives,” he explains over a drink in the Marker Hotel, “the digital economy and urban infrastructures.”

The digital agenda, Buscher says, emerged during the peak of the climate change and sustainability debate when it was focused very much on energy efficiency. That singular aim concerned Buscher and his colleagues who saw wider potential benefits to cities from digital technology.

So they started to look at the role of digital assets and new technologies in an urban economy. Four “pillars” emerged from their research: economic, functional, environmental and political. The economic focus of digital technology was on expanding the jobs market. The functional city referred to the ways technology can make life easier for citizens, such as helping them locate available car-parking spaces. In terms of the environment, technology could enable households to track and manage their consumption and waste.

The fourth pillar, Buscher says, is the creation of a new political platform. “So the relationship between the political leadership and the citizen will also change. More information, more data will be available to inform the citizens and will also give politicians the chance to engage more frequently on different roles for citizens.”

He says the citizen should be at the centre of smart cities: “We don’t want to end up with some techno-utopian nightmare” in which people fear for their privacy and online security.

“It is very difficult to see a future where we will reject the technology. You can’t stop it,” he says. Therefore, “the leadership challenge is to organise and make sense across this complex new world of opportunities in a way that the citizen perceives as benign and as good for them as individuals.”

Buscher says Scandinavian cities are leading the way in this regard. Cities such as Helsinki, Stockholm and Oslo have aligned political leadership with civic executives and citizens to push the concept of smart cities while the approach elsewhere in Europe is more fragmented.

At home, Dublin is also attempting to digitally enhance its infrastructure. During his stay in Ireland, Buscher met with Dublin City manager Owen Keegan for “very encouraging” discussions on different ways for cities to “navigate this changing world”.

In March, Dublin City Council was one of 16 cities and regions around the world to be awarded an IBM grant worth $500,000 as part of the computer giant’s Smart Cities Challenge. The council is already working with IBM on a project analysing transport within the city, which the authority claims has already led to improved services.

The following month, Intel announced plans to test more than 200 sensor “gateways” around Dublin city to gather and monitor data on the environment, including air quality and noise. The goal of the project is to improve the efficiency of the city and improve quality of life, allowing the city managers to pinpoint areas that need work.

Eventually it is envisaged that the project will lead to the development of apps to give residents information on air quality and noise levels.

Furthermore, it will give the capital the honour of being one of the most densely sensored cities on earth.

But it could also be argued that, nice and all as the notion of a smart city is, municipal authorities would be better off spending money on areas suffering from social deprivation or heavy drugs use.

Buscher contends smart city infrastructure can be used to address issues associated with poverty. “We did work in South Africa, in an area that certainly wasn’t well developed,” he says. “The informal economy was the biggest part of the economy and the level of crime and social issues that it created was enormous. So everybody said we need to focus on safety and sanitation and better housing, all that stuff. But one of the most popular things was early micro-payment systems on mobile phones and access to remote learning and education via broadband.”

The technology doesn’t always have to be expensive, he adds. Big cities such as London and New York will inevitably embark on the more ambitious projects, but Buscher argues that as long as people have smartphones, smart city projects are viable. “The problem cities have is they just don’t see the pitch in front of them because all the digital stuff is happening bottom up. They’re only seeing individual digital technology companies and they don’t see the whole. Once you start seeing that picture you can manage it and you can start thinking about how you might manage it. But the citizen will be at the heart, the citizen will be the key.”