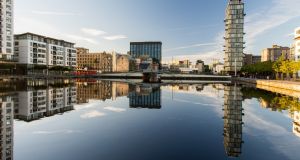 Rents for apartments in Dublin city rose by 11.7 per cent annually, compared with 6.5 per cent for houses. Photograph: iStock

Renters in Dublin city paid €156 more a month to rent a property in September than they did a year earlier, new figures show.

Despite the imposition of price controls across much of the country in 2016, rents continue to rise by double-digit percentages across the cities of Dublin, Limerick and Waterford, the figures from the Residential Tenancies Board (RTB) show.

New tenants continue to bear the brunt of chunky rent hikes, with rents for new tenancies rising by almost 50 per cent more than existing ones.

The latest rent index from the RTB, which is prepared in conjunction with the ESRI, is based on asking rents registered during the third quarter of the year. It shows that monthly rents across the country rose by 7.4 per cent, or by €78, in the year to September.

This means that the average national rent stood at €1,122 in September 2018. Inishowen, Co Donegal, had the lowest national rent, of €472 a month.

The survey also finds that despite record rents, the number of landlords operating in the market continues to fall, and there are now 1,778 fewer landlords than in 2015.

“With many landlords leaving, it is increasing strain and pressure and this must be addressed,” Rosalind Carroll, director of the RTB said, adding that their departure should be of “deep concern”.

In Dublin city, rents rose by 11 per cent on the year, driven by rent increases in apartments (which rose by 11.7 per cent annually, compared with 6.5 per cent for houses).

Galway reported the second-highest rents during the period, at €1,187 per month, followed by Cork (€ 1,172), Limerick city (€928) and Waterford city (€638). Rents in Limerick are now growing at the fastest rate across the country, at 11.8 per cent on an annual basis, with Waterford another city to post double digit growth, with rents up by 10 per cent on the year.

National rents are now almost 14 per cent higher than they were in 2007, with apartments (up by 25 per cent on 2007) continuing to drive growth.

“This indicates that rent pressure zones are having a braking effect on the level of the increase,” the RTB said.

But it will be small relief for those looking to secure a new rental property, with prices for new tenancies up by 8 per cent, compared to 5.4 per cent for existing tenancies.

Refurbished properties and properties being let for the first time are exempt from the controls, which might be a factor in this differential. It means that on a national basis, the average rent for new tenancies is € 1,208 a month, compared with just €956 a month for existing tenancies. And when tenants are in situ, they are now less likely to move; the report finds that tenancies are lasting longer, with a higher proportion of properties (25 per cent) renting for over 12 months.

On Tuesday, Minister for Housing and Planning Eoghan Murphy set out a range of measures to enable the RTB to investigate and sanction landlords who have exceeded the rent control cap. Ms Carroll said that it will be important that this new legislation equips the RTB “with sufficient powers to investigate and apply sanctions.”