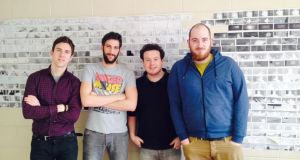 “He’s a boy action hero,” says Dan Spencer, with a “go-getting attitude to saving the day”. The boy in question – Bobby Dazzler – is the star of a TV show by the same name currently under construction at Dublin start-up Giant Animation.

Spencer – alongside company co-founders Ben Harper, Sean Mullen and Alex Sherwood – is creating an interactive world for Bobby Dazzler to inhabit in a show aimed a preschool children.

When he and his colleagues aren’t busy doing that they’re also shaping a “supernatural buddy detective mystery show” aimed at seven to 11 year olds by the name of Creepers .

“It’s been a lot of fun making zany characters and building these worlds,” says Spencer.

Almost two years in business these shows are part of a wider plan to create new revenue streams for the company who have already been nominated for an IFTA and won a Digital Media Award for previous creative and commercial work.

On the day The Irish Times catches up with Spencer, the team is also matching animated images to a series of TED Talks as well as creating visuals for a number of mobile games.

“TED rang us a couple of months ago – they pair up the scientist or speaker and the creative company, [then] we bash out a few sessions on Skype and go ahead with the animation production,” he reveals.

Games-wise, meanwhile, the company is now heavily involved in several preschool gaming applications for both iOS and Android platforms that are set to hit the market later this year.

“We’d come in on the design side from the very start of the game while the coders are going off to do the programming side of things,” explains Spencer, “then [we] meet in the middle to sort out any issues and then go for the finishing line.”

Giant Animation has its roots in the decision by one of the country’s most established animation studios – Brown Bag Films – to move away from commercial animation work. The four Giant founders were all working in separate animation companies when they decided to pool resources.

“We thought maybe we can slot in to that space,” says Spencer, adding, “In the first year we set up a sales pipeline and fortunately got in loads of work, then we got a bunch of artists in who we really like and wanted to keep on. They’re still working for us and we scale up and down between 8 to 12 people at any given time.”

A huge range of commercial work for companies such as One Direct, Fruice and Eurospar followed and the company is now based in rented studio space in Dublin 12.

The founders put much of their progress though down to winning a Competitive Start-Up Fund from Enterprise Ireland just as they began business, allowing them to “get the computers and software we needed” to start the business properly.

“The money was great but the mentorship and development advice we were given was even better. [Enterprise Ireland] have been a solid help to Giant and they get us to meet people we never would have before.”

A concerted effort to attend international animation showcases, events and conferences followed. “You’re meeting the right people and it’s about them knowing that Giant is here to stay and we’re around for the long term and going beyond Ireland as well,” says Spencer.

He continues, “We started looking at creating our own content in terms of TV shows as well looking at options to co-produce with different companies from around the world.”

With that in mind, the focus now is not only on growing commercial contracts but also creating shows such as Bobby Dazzler and Creepers which can offer rewards both in terms of the production itself as well as “back end reasons in terms of merchandising and having different revenue streams”.

Says Spencer, “You have to look at what broadcasting is going to be like in five years’ time – we’re thinking about how we can get ahead of the curve.”