Cream of the crop when it comes to corporate social responsibility

Despite being taken over, the ice-cream maker’s ethical social, product and financial mission statement remains at the heart of the business 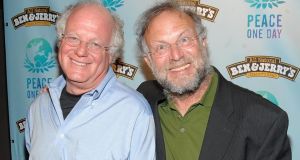 There is an argument for claiming the financial crisis could have been averted if more time were spent developing ethical business practices than focusing on the bottom line.

Jerry Greenfield and his business partner Ben Cohen hit upon the idea of a community-focused business model 35 years ago, decades before the rise of corporate social responsibility. The idea became one of the core values of their small Vermont ice-cream shop, Ben & Jerry’s.

The company started in 1978 in a run- down gas station in Burlington, Vermont after the duo took a $5 correspondence course in ice-cream making from Penn State University.

Decades later, following global expansion and a buyout by one of the world’s biggest consumer goods companies Unilever, the three pillars of Ben & Jerry’s mission statement – focusing on its ethical social, product and financial policy – remains at the heart of the business.

“Business is really the most powerful force in society and needs to do more than simply think about making as much as money as it can and leaving the other players in a society to figure everything else out . . . Business needs to think about more than just itself, it can’t just be greedy”, says co-founder Jerry Greenfield.

However, Ben & Jerry’s innovative mission statement wasn’t part of the business from the outset, instead its commitment to progressive change that came to define the company emerged over time.

“It just evolved really. We started as a homemade ice-cream parlour with the hope of just staying in business. Being a community-based business, the things we did when we started out were showing free outdoor movies and giving away ice-cream at our shop but we didn’t really consider anything larger than the local community.

“As the business began to grow and prosper, we started thinking much more about the role business plays in society,” Greenfield says.

As the business developed Greenfield and Cohen realised they needed to write up a mission statement to set out the company’s socially conscious business ethos.

“In 1988, about 10 years after we started, we wrote a mission statement. It talked about the social, product and financial mission, so at that point we formalised it and it has been refined over the years.

“A year later, we wrote another document that was called Leading with Progressive Values and we really defined what the values of the company are . . . the social mission was the part that was unusual. It talked about using the power of business to innovatively address social issues.

“It was about things like finding non-military solutions to conflict and understanding that capitalism causes certain amounts of consumption and waste, so not to be glib about it, but it was a little bit of a lefty progressive document,” he adds.

Mixed reaction
The company paid premium prices to dairy farmers in Vermont, used environmentally-friendly packaging, worked with Fair Trade and organic suppliers and donated about 7.5 per cent of its pre-tax revenues to charity.

Greenfield says that despite the mixed reaction from the business community at the time, the mission statement worked for the business and helped set them apart from their competitors.

“It helped business and I think many people are surprised to hear that because conventional thinking is that you have to be ruthless and think only about the bottom line or you won’t be financially successful. Our experience was that people are more community-minded,” he says.

Setting ethical standards has not been without its challenges and the business could have undergone big change when it was bought out by British-Dutch conglomerate Unilever for $326 million (€245 million) in 2000.

However when Ben & Jerry’s was sold it retained many of the ideals from its co-founders, and Jerry says the three aspects of its social, production and financial mission are still at the heart of the company.

“By adding those other elements it makes it more challenging as a business. What’s interesting about that is for people at the company, who don’t happen to believe in those things it makes their job more difficult because they’re being asked to think about the social and environmental impact and they don’t really believe they should be doing that.

“Yet for people who believe in it, it makes job much more valuable, gratifying and satisfying because they’re able to meet their own personal needs as well as meeting the business’ needs,” according to Greenfield.

One of the most important aspects of continuing the ideals has been hiring like-minded people.

“It really makes it incumbent upon the business to be hiring people who support the mission and over the history of the company that had been one of the more challenging things, particularly when the business was going through rapid expansion,” he says.

“A lot of the work is through continual education inside the company because it’s not a very traditional way of working. We have a lot of long-term people who are really committed to the mission and they acculturate the work place. It has got to the point where the company attracts a certain kind of person as well.”