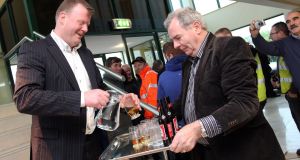 John McCartin and Sean Quinn enjoy a drink as Quinn returns to his HQ on Tuesday morning. Photograph: Lorraine Teevan.

Fresh tensions have blown up over the running of Seán Quinn’s old manufacturing empire, which has been under the control of new management for just over a year.

The disputes have broken out as the company is planning to boost spending on new plant and vehicles and prepares to publish results showing that 2015 sales and profits were well ahead of 2014.

A group of former Quinn Group executives, led by Liam McCaffrey, took over the business, which is now known as Quinn Industrial Holdings, in late 2014, and brought its founder back as a consultant.

However, Concerned Irish Citizens, an organisation based in Quinn’s hinterland in Cavan and Fermanagh, recently began questioning on its Facebook site the way in which the cement and packaging business is being run.

The organisation, part of a movement that wanted to see Mr Quinn restored to his role at the group’s head, claimed that the company had “gone to the dogs” and questioned management’s commitment to its new investment.

Property and goods belonging to the old Quinn group were vandalised and damaged while it was under the control of the now liquidated Irish Banking Resolution Corporation. However, that stopped once Mr McCaffrey and his colleagues took control and brought Mr Quinn back on board.

It is understood that there is tension between management and Mr Quinn over his role, which is focused on manufacturing and customer relationships. Sources say he believed he would play a bigger part in running the company and in decision-making. At the same time, the new owner of its former wind power business, French operator Platina, has hired security after rows with landowners over rights of way to its turbines.

Shortly after administrators of Quinn Insurance sold the Mantlin wind farm on Slieve Rushen for €127 million, the new owners found access blocked in some areas. Local media claimed one security man was threatened with a gun.

While it is not involved in the wind farm, Quinn Industrial Holdings recently offered to mediate between the parties. Unite official Pádraig Murphy, has also offered to help find a solution to the various rows.

Mr McCaffrey has described the situation as “frustrating” as it had distracted attention from business’s performance.

“Over 2015 and 2016, we will be spending at least €20 million and we have increased the workforce by 80,” he said. “We now have 750 working for us. In a few weeks we will be publishing results showing that revenues and profits last year were multiples of what they were in 2014.”

Mr McCaffrey said yesterday it was planning to renew its fleet of 140 trucks and to invest in new machinery.

He confirmed that Warrenpoint Harbour had agreed to build five more silos to allow Quinn to increase cement exports to Britain. The group is also planning to expand its facilities in Rochester in England.

Mr McCaffrey added that Mr Quinn continued to work with the company. “I and my colleagues have nothing but the greatest respect for what he has achieved,” he said.

US bondholders Brigade, Contrarian and Silver Point backed the management buyout of the group in 2014.